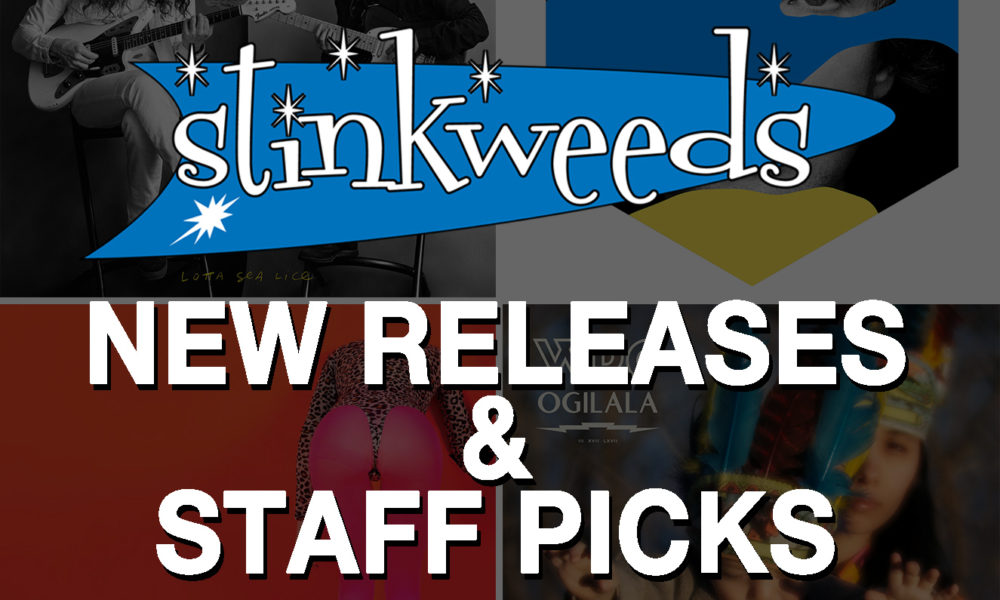 Courtney Barnett / Kurt Vile – Lotta Sea Lice CD/LP+MP3 (Matador)
Lotta Sea Lice is a conversation between friends Courtney Barnett and Kurt Vile, documented in raw, unvarnished song, brimming with personal history, crackling with energy and shot through with humor. What started as a loose plan to record a couple songs with no plans for release, turned into this full-length – “because the vibe was so strong,” says Vile.

Barr Brothers – Queens Of The Breakers CD (Secret City)
A collection of 11 hypnotically fluid songs that speak to the raw, elemental power of reflection, forgiveness, loss, and growing up. The record finds the band, featuring brothers Brad (guitar) and Andrew Barr (drums), and Sarah Page (harp), further on their thrilling path of exploring the outer limits of folk, blues, rock and Americana made north of the American border.

Beck – Colors CD/LP/2xLP (Capitol)
The last time the mass public got a glimpse of Beck, it was at the end of the 2015 Grammy Awards, when Prince was handing him an Album of the Year award for his meditative, mostly acoustic album Morning Phase. Few people knew, but at that time the artist was already two years into work on the follow-up which has taken two more years to complete. Possibly the most aptly titled work in Beck’s storied discography, Colors unfolds in an intoxicating rainbow of auditory tricks and treats, making it a summery smash for the fall season. In addition to the captivating piano-driven “Dear Life,” Colors includes both Beck singles that preceded it: a new mix of the psych-dance summer jam “Dreams” that NPR hailed as “urgently contemporary and irresistibly vintage” and the retro-futuristic earworm “Wow” that had Stereogum praising its “big, sweet incandescent hook” and Esquire rejoicing, “All hail the return of Party Beck.” [Multiple vinyl editions available: indie store exclusive single-disc yellow, single-disc red, and deluxe red colored 180gm 45rpm with customizable cover, transparency prints and a 24-page lyrics art book.]

William Patrick Corgan – Ogilala CD/LP+MP3 (Martha’s Music/BMG Rights Management)
As the founding member of The Smashing Pumpkins, Billy Corgan has created one of the most acclaimed bodies of work in music history, selling in excess of 30 million albums and winning multiple Grammy Awards in the process. For his newest solo opus Ogilala, he teamed up with legendary producer Rick Rubin to make his most intimate body of work to date. “For as long as I can remember the delineation point between songs I wrote for myself and songs I’d pen for whatever band was something I couldn’t explain,” Corgan says. “And it remains so, for they all feel quite personal to me, no matter their time or era. The lone difference on songs for Ogilala is that they seemed to want little in the way of adornment. Having written the songs for voice and guitar, I put myself in Rick’s hands to take the music wherever he’d like. Normally I would have done more, and tinkered more on production, but rather Rick put the onus on me to deliver at a molecular level via live takes. The rest was simply a reaction.” [Limited edition pink colored vinyl pressing in a gatefold sleeve also available.]

Electric Six – How Dare You? CD (Metropolis)
Fifteen years into their career, the band that doesn’t quick offer their thirteenth album.

Neil Finn – Out Of Silence CD (Lester Records Ltd./Kobalt)
“The multi-talented Crowded House frontman can make the most sophisticated pop music sound like the easiest thing in the world.” – The Guardian

The Front Bottoms – Going Grey CD (Fueled By Ramen)
Going Grey finds The Front Bottoms embracing the impermanence of life and finding flexibility in the face of change. Having relocated band headquarters to the coastal New Jersey community of Asbury Park during the demoing stages of the album, Going Grey sees the band acknowledging the nostalgia of simpler times with admiration while welcoming the inevitable unknowns of life. The first single off the album is “Faded,” a catchy track that manages to mix classic Front Bottoms lyrics with a more polished, modern production style. “The Front Bottoms unique lyricism, vocal techniques and instrumental variety invite a diverse array of listeners to delve into their own world. The poetic and obscure lyrics in each song appeal to a broad audience as they tackle issues relevant in everyday life that most people are incapable of articulating.” – The Guilfordian. CD now, vinyl soon.

Jackie Greene – The Modern Lives – Vol. 1 CD (Blue Rose/The End)
Hailed as “the Prince of Americana” by the New York Times, Greene has always had a knack for capturing the human experience in all its messy, emotional complexity, and on his new EP, The Modern Lives – Vol. 1, he draws inspiration from some of the great social paradoxes of our 21st century world. While Greene’s songwriting chops were more than enough to place him in a league of his own (NPR’s World Café raved that his “sound seems at once achingly intimate, surprisingly energetic and unburdened by adherence to genre”), Greene also emerged as a singular singer and guitarist, prompting Rolling Stone to praise his “honeyed tenor” and name him among “the most notable guitarists from the next generation of six-string legends.”

The Radio Dept. – Teach Me To Forget CDEP/12” (Labrador)
The Radio Dept. return with their first new material since 2016’s album Running Out Of Love. The six-track EP includes two brand new songs, three remixes and the band’s new take on the title track.

The Rural Alberta Advantage – The Wild CD/LP (Paper Bag/Saddle Creek)
“The Rural Alberta Advantage has been wailing out heart-on-your-sleeve indie rock for 10 years, leading sing-alongs and cathartic dance parties alongside three full-length album releases. But on The Wild, the Toronto-based band’s fourth full-length, there’s been a big change: in fall 2016, it announced that longtime bandmate Amy Cole had left, with keyboardist/singer Robin Hatch joining to complete the trio. While Hatch has done small tours with the band since summer 2016, this album is her first recording with her new bandmates.” – CBC Music

Stars – There Is No Love In Fluorescent Light CD/2xLP (Last Gang)
Stars have made their career telling the tales we keep in the darkest and most hopeful parts of our souls. Delivering the hard and soft edges of life and love, their Peter Katis-produced new album There Is No Love In Fluorescent Light is ushered in by lead tracks “Privilege” and “We Called It Love.” From the reflective beauty of Amy Millan’s vocal in “Privilege,” “never got what you want, never got it,” to Torquil Campbell’s contemplative and contrary, “I don’t believe that people change…but I’ve changed” on “We Called It Love,” Stars comfort and reassure us that within the experience of failure and fucking up is the path to a life well lived.

St. Vincent – MASSEDUCTION CD/LP Loma Vista)
Themes of power and sex, imperiled relationships and death slice through St. Vincent aka Annie Clark’s highly anticipated new album MASSEDUCTION, the enigmatic artist’s first since her Grammy-nominated self-titled 2014 effort. The 13 tracks swirl with guitar and piano, synths and strings, and drum beats that punch with purpose. The album was co-produced by St. Vincent and Jack Antonoff at Electric Lady Studios in Manhattan, with additional recording at Rough Consumer Studio in Brooklyn, and Compound Fracture in Los Angeles. MASSEDUCTION is the culmination of years of writing, with songs crafted from voice memos, text messages, and snippets of melodies that came to Clark while traveling the globe. Special guests on the album include Thomas Bartlett on piano, Kamasi Washington on saxophone, Jenny Lewis on vocals, and beat production from Sounwave. Greg Leisz and Rich Hinman add pedal steel, and Tuck and Patti Andress contribute guitar and vocals respectively on select tracks. [Two limited vinyl pressings are available: single-disc pink and a Deluxe pink vinyl edition with translucent PVC sleeves, 24″ x 24″ foldout poster, sticker sheet and 28-page booklet.]

Uncle Acid & The Deadbeats – Vol 1 CD (Rise Above)
Originally released in 2010, Vol 1 is the first efforts of unknown songwriter, Kevin Starrs. Pressed in small numbers for a non-existing fan base, the album took several months to shift all 30 CD-R copies and provided a small platform to fund its follow up, Blood Lust (2011). Recorded on a tight budget of stashed dole money and with little knowledge or regard for conventional recording techniques, the chaotic results speak for themselves; distorted vocals, out of tune harmonies, ragged musicianship and everything pushed to the red. The clatter of mic stands falling over mid performance, the rustling of lyric papers, the missed key changes and flubbed lines. Everything you would want to avoid is here. Self-funded, self-recorded and self-released to a fanfare of silence, Vol 1 is a true D.I.Y. effort from start to finish. In the years following, the album became something of a cult curiosity. Despite the shoddy work of bootleggers and impatient collectors, Starrs refused to re-release the album until he could work on its remix and oversee the mastering. CD now, vinyl soon.

The World Is A Beautiful Place & I Am No Longer Afraid To Die – Always Foreign LP+MP3 (Epitaph)
Recently released on CD – now available on clear vinyl. TWIABP are back and as progressive as always. Vocalist David F Bello says of the record: “When we started writing we were fresh off Trump being elected, so there’s an anger to the album that’s different from what we’ve done in the past. There’s a lot more resistance thinking throughout the songs – not in a way that’s strictly anti-Trump, but also addressing things like white supremacy and controlling elements of the state.”

Wu-Tang Clan – Wu-Tang: The Saga Continues CD (E1)
RZA shepherded members of the Wu-Tang Clan for a new LP that was “crafted by” his beat-making associate DJ Mathematics.

Nick Cave & Warren Ellis – Wind River [OST] LP (Lakeshore)
Recently released on CD – now available on vinyl. Written and directed by Taylor Sheridan, Wind River is a chilling thriller that follows a rookie FBI agent (Elizabeth Olsen) who teams up with a local game tracker with deep community ties and a haunted past (Jeremy Renner) to investigate the murder of a local girl on a remote Native American Reservation in the hopes of solving her mysterious death. The film features a sublime original motion picture soundtrack by Nick Cave and Warren Ellis (Hell Or High Water, Lawless, The Assassination Of Jesse James).

King Khan – Murder Burgers [2014] LP (Ernest Jenning)
The master of psychedelic H&B, used all of his magic to reunite one of his all-time favorite bands, The Gris Gris from Oakland, CA to back him up on previously Bandcamp-only long player Murder Burgers.

Nashville Pussy – From Hell To Texas [Reissue/2009] LP+CD (BMG Rights Management)
Nashville Pussy – Ten Years Of Pussy 2xLP+CD (Steamhammer)
Nashville Pussy is a band who hail from Atlanta, GA deep in the heart of “the BBQ Nation” and sound like AC/DC slap boxing with Lynyrd Skynyrd while Motörhead watches. They have weathered numerous labels, trends and bass players.