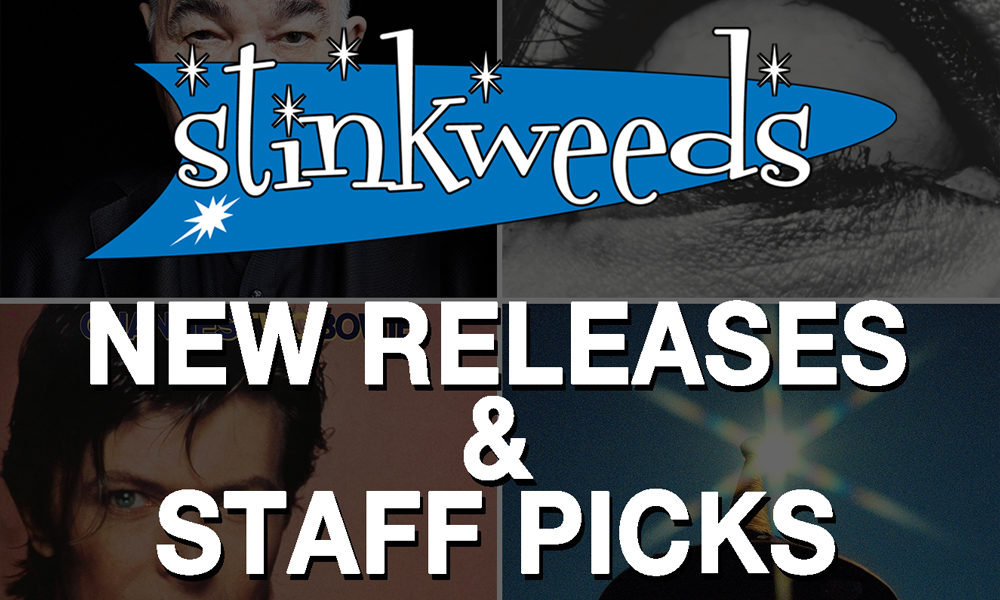 David Bowie – Changestwobowie [Reissue/1981] CD/LP (Rhino)
Digitally remastered edition. Changestwobowie is a David Bowie compilation album issued in 1981 by RCA Records. Its title and packaging followed the format of RCA’s earlier Bowie compilation, Changesonebowie released in 1976. As well as post-1976 singles, the album collected songs from earlier in Bowie’s career that had not appeared on Changesone.

The Nels Cline 4 – Currents, Constellations CD (Blue Note)
Guitarist Nels Cline debuts a new band with the Blue Note Records release of Currents, Constellations featuring The Nels Cline 4, an intrepid unit that builds upon Cline’s acclaimed collaboration with guitarist Julian Lage by adding the fierce and versatile rhythm section of bassist Scott Colley and drummer Tom Rainey. Of all the rich and varied projects guitarist Cline has pursued since his emergence as a leader in the late- ‘80s, his two-guitar duo with Lage, documented on the 2014 Mack Avenue album, Room, ranks among the most special.

The Damned – Evil Spirits CD/LP (Spinefarm)
The first album in a decade from the British punk legends. Produced by Tony Visconti (David Bowie, T-Rex and more).

A Hawk and A Hacksaw – Forest Bathing CD/LP (LM Dupli-cation)
Forest Bathing, or Shinrin-yoku, is a term that means “taking in the forest atmosphere.” It was developed in Japan during the 1980s and has become a cornerstone of preventive health care and healing in Japanese medicine. “Taking in the forest atmosphere” became the inspiration for A Hawk and A Hacksaw’s newest album. Their forest bath of choice is the Valle De Oro National Wildlife Refuge in New Mexico. The album features ten original compositions by Heather Trost and Jeremy Barnes.

King Tuff – The Other CD/LP+MP3 (Sub Pop)
The ten tracks that make up The Other represent a kind of psychic evolution for Kyle Thomas aka King Tuff. No less hooky than previous records, the new songs ditch the goofy rock-and-roll bacchanalia narratives of earlier outings in favor of expansive arrangements, a diversity of instrumentation, and lyrics that straddle the fence between painful ruminations and a childlike, creative energy untarnished by cynicism. The soulful and cosmic new direction is apparent from the album’s first moments: introduced by the gentle ringing of a chime, acoustic guitar, and warm organ tones, The Other is a narrative of redemption born of creativity. As Thomas sings about being stuck in traffic, directionless, with no particular reason to be alive, he hears the call of “the other,” a kind of siren song that, instead of leading towards destruction, draws the narrator towards a creative rebirth. Elsewhere, tracks like “Thru The Cracks” and “Psycho Star” balance psychedelia with dayglo pop hooks.

The Moondoggies – A Love Sleeps Deep CD/LP (Hardly Art)
A Love Sleeps Deep‘s bones rattle with all the seismic changes of the last five years since the release of The Moondoggies’ Adios I’m A Ghost. While the Washington band got lumped in early on with the woodsy folk-rock/Americana movement that sprung up in the Pacific Northwest in the 2000s, the core Moondoggies sound has always been rock in the more classical sense – more Pink Floyd than Woody Guthrie. A Love Sleeps Deep crystallizes that. Perhaps more importantly, it finds singer/guitarist Kevin Murphy at his most pointed as a songwriter. There’s no lyrical pussyfooting this time around. Lacking the need to prove himself, he opens up and lays bare his feelings. “Generally, I feel frustrated because there’s a lot of this escapist stuff going on in rock and roll,” says Murphy. “I just didn’t want to not talk about my frustrations with what I was seeing around me. I have two little girls now, and I’m just thinking about where things are going. Love in my life has changed everything.”

µ-Ziq – Challenge Me Foolish CD/2xLP (Planet Mu)
Challenge Me Foolish is an almost lost album of µ-Ziq material circa 1998-99, an era that saw Mike Paradinas release Royal Astronomy on the now defunct Virgin subsidiary Hut Records, and also tour with Björk. It’s an era of his music that’s definitely worth re-exploring, in which Mike went against the grain by producing music that was baroque, melodic and whimsical, while the IDM movement he was lumped with made instrumental music that was often neurotic and complicated.

Prof – Pookie Baby CD/2xLP+MP3 (Rhymesayers)
While there’s been a perception that the eccentric Minneapolis MC is out-of-control, Prof’s undeterred, unwavering commitment to his fans reveals the craftsmanship behind the perceived chaos. As his latest album title states, the newly sophisticated Prof is more accurately referred to as Pookie Baby. While Prof may be best known for his show-stopping live performances, this album pulls back the curtain, inviting the listener to join him for the most private of moments, all with a sleek touch of sophistication. [Limited colored vinyl pressing also available.]

Josh Rouse – Love In The Modern Age CD/LP (Yep Roc)
After spending the better part of a year touring behind his critically acclaimed eleventh album, The Embers Of Time, Josh Rouse was ready for a change. Trading in his acoustic guitar for a synthesizer, he began experimenting with a new sonic palette, one inspired by everything from 80’s sophistipop and late-career Leonard Cohen to British indie rock and New York new wave. The resulting record, Love In The Modern Age, is an infectious collection that still bears Rouse’s distinct fingerprints, even as it pushes his limits and forges a bold new chapter more than 20 years into his celebrated career.

Wreckmeister Harmonies – The Alone Rush CD/LP+MP3 (Thrill Jockey)
Wrekmeister Harmonies’ new album, The Alone Rush, their first as the core duo of JR Robinson and Esther Shaw, is a hauntingly intense and dark meditation on death and isolation, whose concise compositions carry an emotional heft without the orchestrated bombast of their previous four albums. After confronting the dual tragedies of the death of a loved one and the exhaustive experience of caring for another family member with a chronic illness, Robinson and Shaw removed themselves from the intensity of Chicago living to the seclusion of Astoria, OR. With little else besides their instruments, the couple focused on just two things: healing their psychic wounds and composing.