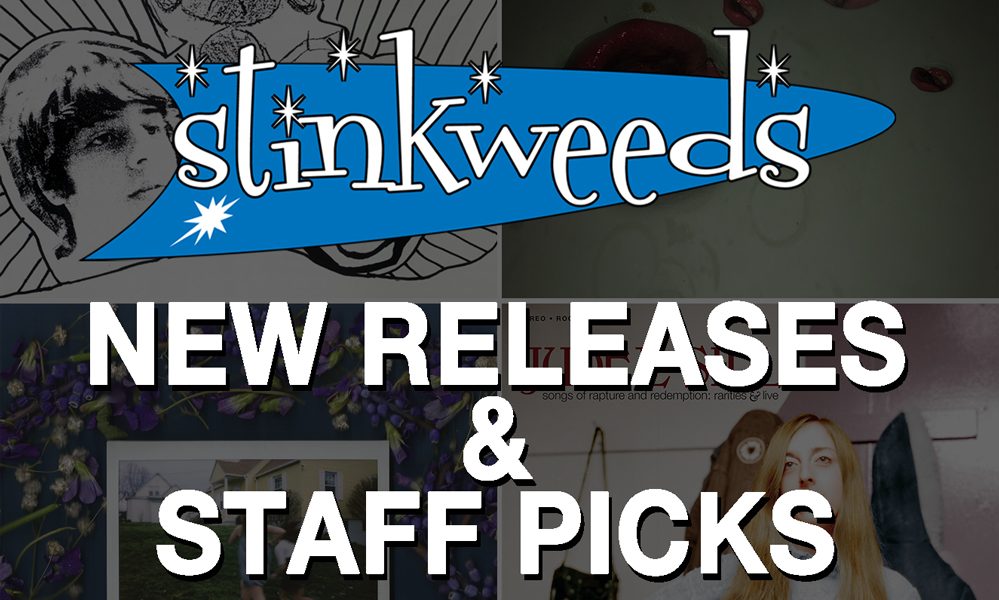 Death Grips – Year Of The Snitch CD (Harvest)
Year Of The Snitch is the sixth studio album by experimental the hip-hop group comprised of Stefan Burnett (aka MC Ride) and production team Zach Hill and Andy Morin. “In the process of trying to sabotage their career at every turn, Death Grips became career artists. Regardless of how you classify their prolific output thus far, the noise-rap art project has averaged one album per year, with enough variation and quality control to make their ‘will they or won’t they break up’ shtick background noise. They’re industrious, downright reliable, even. So, on their 10th release in seven years, Year Of The Snitch, Death Grips stay politically agnostic, persistently agitated—in a word, noided. It’s kinda quaint. Maybe even comforting.” – Pitchfork [Vinyl edition – including limited indie-only clear pressing – due September 7.]

El Ten Eleven – Banker’s Hill CD/LP+MP3/Cassette (Topshelf)
The music of El Ten Eleven has been described as “meditation in motion,” which seems apt. To fully realize this descriptor the band worked with an outside producer for the first time in their 16-year career, teaming up with Sonny DiPerri and moving into the incredible confines of Panoramic House on the beautiful Northern California coast. The result is Banker’s Hill – an album that explores the paradox of beauty in anxiety, the importance and effect of family and the fleeting possibility of satisfaction.

Foxing – Nearer My God CD/2xLP (Triple Crown)
The St. Louis, MO emo/alternative/math-rock band’s much anticipated third album, Nearer My God, was produced by Chris Walla (Death Cab For Cutie, Tegan & Sara) and the band’s own Eric Hudson. The record tackles such weighted subjects as religion, mental illness, political instability, global disaster and the near constant sense of impending doom. The band reflects these feelings in the album’s own title which is taken from the name of a 19th-century hymn said to be the song played as the Titanic sank and used in the now infamous CNN doomsday video meant to be aired as the world ends. However, among the dark subject matter, the band delivers an album that is, without a doubt, their most immediate, complex, sonically grand and focused work yet.

Shooter Jennings – Shooter CD (Atlantic)
For nearly two decades, Shooter Jennings has defied expectation while constantly expanding the parameters of country, rock ‘n’ roll, and beyond. The scion of American music royalty, he has affirmed his own place in histories still to come as a truly limitless artist whose ambitious experimentation spans myriad genres and creative platforms. Ever the outlaw, Jennings has now crafted what might well be his most truly idiosyncratic work thus far, Shooter. Produced by longtime friend and collaborator, Low Country Sound founder Dave Cobb at the renowned RCA Studio A on Nashville’s Music Row, the album sees Jennings staking out a fairly straightforward goal: to simply make a great country record, singing songs about growing up and getting older, about going out and getting trashed. In short, making music for real people with real lives. [Vinyl edition due August 24.]

Dawn Landes – Meet Me At The River CD/LP+MP3 (Yep Roc)
Through four full-length albums, Dawn Landes has blazed her own path with songs that are as fresh as they are timeless. Still, there’s no mistaking that strains of Nashville reside in her voice and in her musical soul, and now, with her fifth album, Landes is finally bringing them to center stage. Meet Me At The River is Landes’ self-described “Nashville record,” and she has assured its pedigree by enlisting the production skills of Fred Foster, the Country Music Hall of Fame member who played a pivotal role in the careers of Dolly Parton, Roy Orbison, and Kris Kristofferson. [Limited edition sage green colored vinyl pressing also available.]

MIKE – Black Soap CD/LP (Lex)
MIKE’s music carries age beyond his years. Born in New Jersey, MIKE moved to London with his mother before settling in The Bronx for the remainder of his teenage years. Both regions have had an audible influence on the young rapper’s music – in London he was immersed in grime and the music of King Krule, and in the Bronx he was turned on to Earl Sweatshirt and MF Doom. Through his mixtapes Winter New York, Longest Day, Shortest Night, May God Bless Your Hustle and his EP By The Water, he has made a definitive statement on the current state of youth in New York. MIKE raps over characteristically lo-fi, and soulfully hazy, self-produced beats. Themes about the depression and anxiety that accompany being young and African American abound throughout his music, but a muted sense of hopefulness and certainty that he is moving towards ultimate triumph is the motor quietly propelling things forward.

Tomberlin – At Weddings CD/LP+MP3 (Saddle Creek)
On her deeply moving debut At Weddings, Sarah Beth Tomberlin writes with the clarity and wisdom of an artist well beyond her years. Like Julien Baker and Sufjan Stevens, she has a knack for transforming the personal into parable. Like Grouper, she has a feel for the transcendent within the ordinary. Born in Jacksonville, FL, and now based in Louisville, KY, Tomberlin wrote most of At Weddings while living with her family in Southern Illinois during her late teens and early twenties. The daughter of a Baptist pastor, Tomberlin found herself questioning not only her faith, but her identity, her purpose, and her place in the world. In songwriting, she found relief and lucidity she had trouble articulating otherwise. When she was 19, she wrote “Tornado” on her parents’ piano and began to gain confidence in her music. A year later, Tomberlin had enough songs to fill an album. “My number one goal with my music is for honesty and transparency that helps other people find ways to exist,” she says. With At Weddings, this remarkable young songwriter offers up comfort and wonder in equal measure.

Steve Lacy – Reflections [Reissue/1959] LP (Jeanne Dielman)
Legendary reeds-man Steve Lacy takes on the brilliant compositions of Thelonious Monk. Reflections is a glorious quartet session with Lacy on soprano sax, accompanied by the great Mal Waldron on piano, as worthy a pianist to take on the tunes of Monk as one could imagine, along with Buell Neidlinger on bass, and the amazing Elvin Jones on the trap kit. Though it’s only Lacy’s second recording as a leader, his maturity and range are well on display here as he re-imagines seven of Monk’s beautiful tunes as his own.

Liars – Original Soundtrack To The Film 1/1 LP (Mute)
Recently released on CD – now available on vinyl. Originally recorded in 2015, Original Soundtrack To The Film 1/1 marks the last recording of Liars’ core team of Angus Andrews and Aaron Hemphill. The film submerges the audience into the mind of Lissa, a twenty-year-old girl trapped in rural Pennsylvania, who grapples with sex, drugs, love and loss. Liar’s daring soundtrack follows the release of 2017’s acclaimed TFCF (Theme From Crying Fountain), an album Pitchfork said “couldn’t be a more appropriate marker of the irrepressible project’s evolution, nor a more fitting testament to Liars’ legacy.”

The Moldy Peaches – The Moldy Peaches [Reissue/2001] LP+7” (Rough Trade)
The Moldy Peaches were established in the mid- ‘90s by Adam Green and Kimya Dawson, after meeting in upstate New York. The duo helped spawn the “anti-folk” music genre movement, bringing a more quirky, lo-fi punk element into the indie music scene. After releasing their own music for a few years, they collected their best material for a proper album, and in 2001 shared The Moldy Peaches via Rough Trade Reocrds. [Limited colored vinyl pressing also available. CD reissue due August 17.]

ShadowParty – ShadowParty LP (Mute)
Recently released on CD – now available on vinyl. ShadowParty’s debut – recorded in Boston, LA, Manchester and Macclesfield – is a synth-pop record with guitars and strings, and guests including the incomparable vocalist Denise Johnson (Primal Scream, A Certain Ratio) and The Verve’s revered guitarist Nick McCabe. It’s the sound of a blast. ShadowParty burst through your speakers; pulsing electronics get swept away with lush orchestrations, bold ‘80s-fused beats get carved up by haunting guitars and vocals tower through each moment, whispering sweet harmonies and unspoken despair.

Shovels & Rope – Predecessors 3xLP (Dualtone Music)
Cary Ann Hearst and Michael Trent (known jointly as the Americana/folk duo Shovels & Rope) started their career performing independently as solo artists, each releasing records under their own names in the mid-to-late ‘00s and early ‘10s. In 2008 they released the album titled Shovels & Rope as a collaboration and the two artists decided to tour together. Performing live, they’d play together on songs from Hearst’s Lions and Lambs (2011), Trent’s The Winner (2010), and their collaborative album, creating the first live glimpses of the band that would eventually become Shovels & Rope. Predecessors features their early individual solo albums along-side early collaborations in the form a three LP package featuring Hearst’s Lions and Lambs, Trent’s The Winner, and a third LP with never-before-released material from Shovels & Rope’s archives.

Judee Sill – Songs of Rapture and Redemption: Rarities and Live 2xLP (Run Out Groove)
The astonishing Judee Sill was the first artist signed to David Geffen’s Asylum Records, and her eponymous 1971 debut was the label’s first ever album. Sill’s music is intensely spiritual, redolent of both mysticism and divine imagery, yet grounded by great songwriting and a pure but powerful singing talent. Her songs impart incredible intimacy that is enhanced and not diminished by her sometimes complex string/orchestral arrangements (remarkably Sill arranged and conducted the strings/orchestra on both of her albums herself!). When stardom didn’t follow the critical acclaim of her first two albums her career never recovered. Sill was dead in 1979 at just 35 of a drug overdose. However, the brevity of Judee’s musical legacy is vastly outweighed by the emotional power in the work she left behind. This brand-new 19-track, 2xLP collection includes demos, outtakes and live recordings which are making their premier on the vinyl format.

Gillian Welch – Soul Journey [Reissue/2003] LP (Acony)
Gillian Welch’s rich and remarkable career spans over 20 years and is a pillar of the modern acoustic music world. This is the long-awaited first pressing of the roots singer/songwriter’s moving 2003 album, Soul Journey, a collaborative effort with producer/multi-instrumentalist David Rawlings which Mojo called “pretty much perfect” in their 5-star review. It marked the pair’s first experimentation with a fuller, electric sound and is home to some of the most beloved songs in Welch’s catalog. Mastered for vinyl direct from the analog tapes by Gillian Welch and David Rawlings on their own custom-built VMS 80 lathe with Ortofon amplifiers and plated and pressed at Quality Record Pressings. The vinyl LP comes packaged in a gatefold old-style tip-on jacket with a printed insert and lyrics which are included with the album for the first time.

Wu-Tang – Pearl Harbor 12” (eOne)
This special 12″ release features a brand-new remix and artwork for The Saga Continues cut “Pearl Harbor”, issued to commemorate the passing of Sean Price on August 8, 2015. Price was featured on Wu-Tang’s 2017 album and was an original member of the underground rap crew, Boot Camp Clik. He was known as a prominent and lyrical god, rising to fame back in the ’90s around the same time as some of the Wu-Tang original members. There was a mutual respect between the crews hailing from Brooklyn and Staten Island.