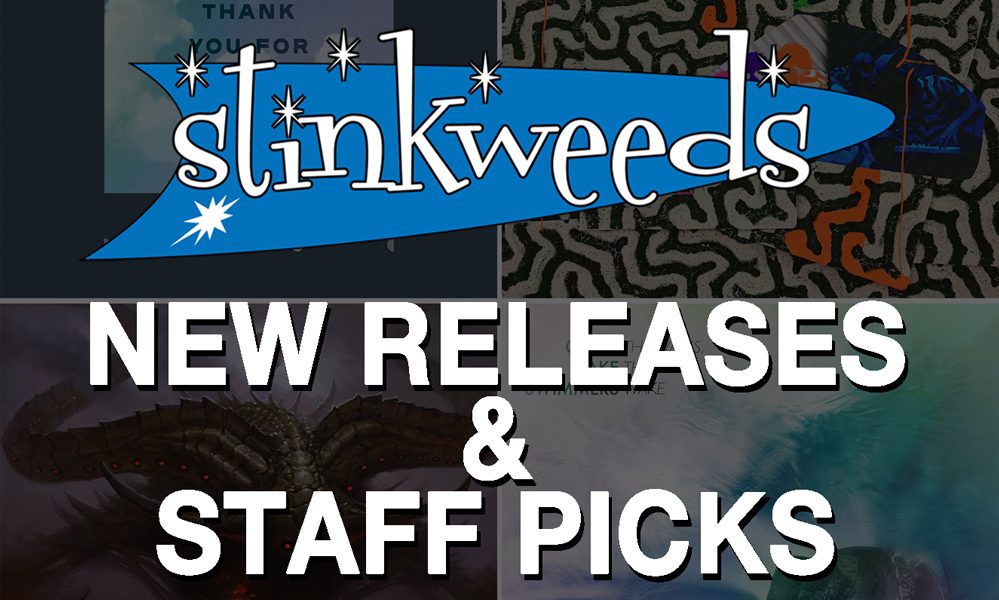 Death Cab For Cutie – Thank You For Today CD/LP/Cassette (Atlantic)
Thank You For Today is the sound of Death Cab For Cutie both expanding and refining; a band 20 years into its evolution, still uncovering new curves in its signatures, new sonic corners to explore. The Seattle band’s ninth studio album, recorded in L.A. with producer Rich Costey in late 2017 and early 2018, stands alongside classic albums like their 1998 debut Something About Airplanes and 2003’s masterful Transatlanticism as a definitive collection – 10 tracks that are by turns beautiful and dynamic and darkly anthemic and bittersweet. On songs such as the kinetic “Gold Rush”, “Northern Lights” and “You Moved Away” Ben Gibbard ruminates on the flux going on in his hometown and weaves a thread throughout the album about how interconnected geography is with memory, and how hard it can be to hold onto places, and to people, too.

Cullen Omori – The Diet CD/LP+MP3 (Sub Pop)
Cullen Omori’s path to his second album The Diet wasn’t an easy one. After the release of his first album, New Misery, he had to deal with busted vans, crashed cars, mangled relationships, and other trials that can leave one feeling like the world is playing a cosmic joke. From the guitar that drops out of the sky on the opening track “Four Years” all the way through the fade-out of kaleidoscopic closer “A Real You”, The Diet is a powerful modern indie-rock album that is buoyed by warped, analog pedals/transistors and tailor-made guitar tones. Omori’s winsome vocals crisscross ‘70s art rock and classic songwriting all within the span of 40 minutes. The album represents a new chapter for the former Smith Westerns member, one in which he stretches out his songwriting chops and uses his life experience to craft loose-limbed, hook-filled songs that combine pop appeal with finely sutured lyrics.

Trevor Powers – Mulberry Violence CD/LP (Baby Halo)
Trevor Powers is a musician, producer, and composer based in Boise, ID. He began recording music in 2011, releasing a trilogy of albums under the moniker Youth Lagoon before announcing the end of the project in 2015. While taking crash courses in classical theory, jazz, and ancient modes throughout the time that followed, Powers started making music experiments inspired by the visual works of artists such as Francis Bacon, Sister Gertrude Morgan, and Harry Clarke. Lining his walls in crude print-outs of pictures, he found graphic saturation helped inform the social and spiritual themes of his music. For two years, Powers crafted his own library of sounds, grotesque and bewitching, to serve as the backbone to the poetry he had been writing while traveling between Europe, Asia, and the United States. Embracing a combination of noise, beauty, and mercurial avant-pop atmospheres, he began molding these experiments into songs highlighting the intersection of unity and chaos, nightmares, and the invisible forces at war within the human self. Retreating to Tornillo, TX, Powers brought his songs and a handful of contributors to Sonic Ranch, a residential studio complex in the middle of a 2,300-acre orchard, to record Mulberry Violence – the debut album under his birth name, Mulberry Violence. [Limited white colored vinyl pressing also available.]

Animal Collective – Tangerine Reef CD/2xLP (Domino)
“Over the last few years, Animal Collective has been collaborating with a Miami-based multimedia company called Coral Morphologic. Founded by marine biologist Colin Foord and musician Jared McKay, Coral Morphologic seeks to bring awareness to the peril of the ocean’s reefs through preservation and art projects. Foord delivered a spoken word intro to ‘Coral Lords’ off Avey Tare’s 2017 album Eucalyptus. More recently, AnCo and CoMo teamed on a new collection of songs called Tangerine Reef. Premiered live during the New York edition of David Lynch’s Festival of Disruption back in May, the music is now released as a double album.” – Consequence of Sound

ESG – Come Away With ESG [Reissue/1983] CD (Fire)
Reissue of the classic 1983 genre-busting debut album by the Bronx sisters ESG. So the story goes Anthony H. hooked up with Ed Bahaman and the band’s landmark first effort, Come Away With ESG was born. In the intervening years, it’s been sampled to death. Those in the know have hailed ESG as innovators who helped fashion hip-hop and house music and rewrote post punk, yet somehow remain something of a secret. [Vinyl edition due September 7.]

Föllakzoid & J. Spaceman – London Sessions CD/LP (Sacred Bones)
It should come as no surprise to fans of the Chilean trio Föllakzoid that upon meeting the legendary Jason Pierce aka J. Spaceman (Spacemen 3, Spiritualized), they discovered they were kindred spirits. Föllakzoid and Spaceman’s projects share a restless drive to explore the outer limits of music, as well as an uncanny ability to lock into a groove until it infiltrates the deepest recesses of the listener’s psyche. When Föllakzoid met Spaceman backstage at a Wooden Shjips gig at London’s Electric Ballroom several years ago, they instantly became friends. For London Sessions, the Chileans and Spaceman joined forces for new live renditions of “Electric” and “Earth,” two highlights from Föllakzoid’s III.

Great Lake Swimmers – The Waves, The Wake CD/LP (Nettwerk)
Abandoning the acoustic guitar, The Waves, The Wake sees the Toronto indie folk group branching out to include new sounds such as harp, lute, pipe organ, woodwinds, congas and marimbas, alongside the more familiar flecks and chimes of the banjo, piano, and 12-string electric guitar. The stunning acoustics of the historic, 145-year-old Bishop Cronyn Memorial Church in London, Ontario lend the atmospheric touch to the album, under the guidance of co-producer Chris Stringer (Union Sound).

“Mitski makes music that codifies our desires to be seen and our distresses about being alive. After years of growing a nearly religious fanbase with albums like Retired From Sad, New Career In Business and the indefatigable Bury Me At Makeout Creek, she become an indie rock household name with her 2016 album Puberty 2. Her latest, Be The Cowboy, is self-described as her saddest ever, but it is also very much about maintaining command of one’s own world. As with Mitski’s previous LP Puberty 2 – one of FACT’s favorite albums of 2016 – themes of love, identity, heartbreak and vulnerability abound on the new album. But where Puberty 2 cranked up the distortion on her grunge-rock guitar, Be The Cowboy comes wrapped in a glossier sheen from long-time producer Patrick Hyland – and it’s often at odds with the album’s underlying sense of isolation.” – The Fader [Limited Deluxe coke bottle green colored vinyl pressing also available.]

The Myrrors – Borderlands CD/LP (Beyond Beyond Is Beyond)
If you see The Myrrors as the dust-caked disciples of a specific strain of desert-drone mysticism, there’s little on Borderlands, their fourth full-length LP released in as many years, to dissuade you from that vision. Instead, there’s only confirmation – an intoxicating combination of outlook and output that clarifies and crystallizes the band’s many sonic strengths throughout the album’s fantastically unfolding forty-plus minutes.

Papa M – A Broke Moon Rises CD/LP/Cassette (Drag City)
Following his phoenix-like rise from the ashes in late 2016, Papa M strikes back with just four acoustic guitars and a bit of drums. Naturally, it’s completely spellbinding and hypnotizing and engrossing and also kind of pretty, but yeah, a little frightening too. The five songs of A Broke Moon Rises find David focusing his technique in unknown directions, to find out what he can do with them. As the quietly funereal march of the opening track resonates with a spare drum beat, we are completely transfixed into the open spaces around the guitars.

WHY? – Alopecia [Reissue/2008] CD/LP+MP3/LP+7”+MP3 (Joyful Noise)
“I’ll go unknown by torpedo or Crohn’s / Only those evil live to see their own likeness in stone.” It’s the kind of couplet you’d carve into a wall whilst savoring the irony at hand, but when Yoni Wolf spit the line 10 years ago he was blissfully, broodily unaware that he and his band WHY? were creating a career-defining album – one so fan-adored that it would go out-of-print, and so influential that the art-pop heroine Lorde herself would lovingly steal the very lyric quoted above. When it dropped in 2008, Alopecia not only marked WHY?’s evolution from a sonically collaged mostly solo project to a live-recorded powerhouse band of badass multi-instrumentalists. It also minted a genre of one: wryly written, poignantly posed, simultaneously swaggering and heart-rending song-rap that jangles like folk, bursts like psych-rock, and sways like chamber pop. The album’s 2018 reissue cheekily etches that aural likeness into our musical history. [Limited deluxe colored vinyl pressing with bonus 7” also available.]

Mark Kozelek – Mark Kozelek LP (Caldo Verde)
Released last May on CD – now available on vinyl. The first of two albums Kozelek has planned for 2018, Mark Kozelek is comprised of 11 songs that were recorded in hotel rooms around San Francisco, including the previously released “This Is My Town” and “My Love For You”.

Open Mike Eagle – Rappers Will Die Of Natural Causes LP (Auto Reverse)
Limited black and blue colored vinyl reissue of the long unavailable second album by highly acclaimed rapper Open Mike Eagle featuring several tracks that are amongst the most popular in his live set. From dark themes like morality and race relations, Mike managed to draw out some of his most imaginative and witty work. And with features like Rhymesayers Entertainment’s P.O.S. and art rap godfather MC Paul Barman, Rappers Will Die Of Natural Causes was the release that put Open Mike Eagle into the national rap conversation.

Ra Ra Riot ‎– The Rhumb Line [Reissue/2008] 2xLP (Barsuk)
Tenth anniversary gatefold double vinyl reissue including a second LP of eleven additional live and demo tracks, nine of which are previously unreleased; the set is bound in a linen-like cover with gold-foil stamping. Rolling Stone hailed The Rhumb Line as “a blissful chamber-pop breakthrough” in their 4-star, top 40 albums of the year review.