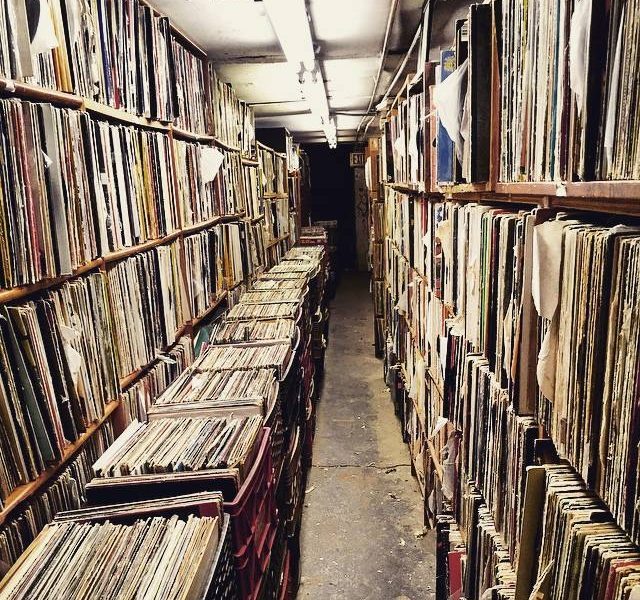 Alphabetize Into Obscurity: A Journey Into the Unknown Vol. 8

This weekend, I drove to a friends house in Black Canyon City to observed the Perseids meteor shower. Once the dark desert monsoon skies opened up, with bolts of lightning flashing in the distance, and the stars and milky way presented itself, with brief flashes of light streaking across the sky, I couldn’t help but think of the vastness of our planet and space that lies between other celestial bodies. The Perseids meteor shower has a 133 year orbit. Every 133 years, it’s path crosses ours, shedding particles of space material into our atmosphere, grabbing our attention for a split second. But what of the material shed in space. Perhaps it will travel alone forever, never to be seen by a human eye, or maybe it will make it’s way to our planet, on it’s own trajectory, catching the eye of anyone who happens to be looking up in a particular direction. Like the music in our lives, we all pay attention for the big show. It’ll find it’s way into news stories and facebook posts and photos. Some music may only catch the ears of a few unsuspecting listeners, burning up in it’s orbit for as long as someone will keep an eye on it. But, some music flies off into space, never to be heard but by those who created it. Unless we seek out these lost treasures, they will be lost forever. Like so much space dust, these albums are alphabetized into obscurity.

All of these albums are for sale at Stinkweeds…for cheap 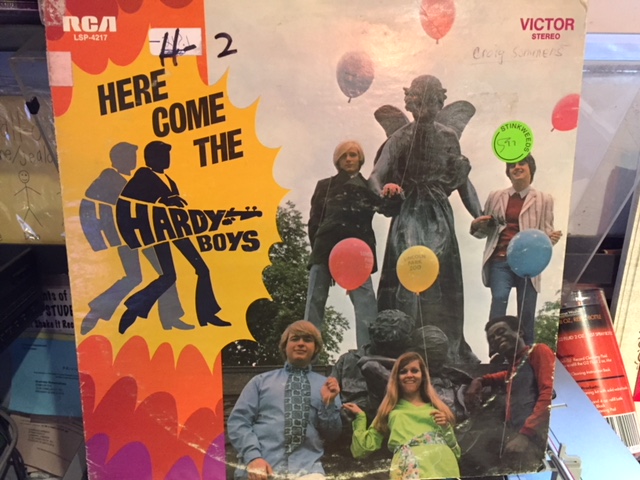 The Hardy Boys – Here Come The…

This is a beautiful relic of a bygone era. Music used to be no different than a lunchbox, or action figure, in that it was as simple as slapping a product name on a record and selling it as an extension of the characters you knew and loved. This was a very popular sales tactic in the 60s, where music had found it’s audience amongst young consumers, through pop and rock n roll. It’s not enough to read and watch the antics these lovable characters would get themselves into. No! You need to listen to their band, too! So, why wouldn’t a pair of young brother/detectives, such as the Hardy Boys, have a band? After a long day of finding treasure, saving people, fighting bears and chasing down clues, you need to unwind. And, nothing gets you all loosey goosey like shredding some rock tunes with your buds. What you end up with is an album of perfectly catchy 60s pop tunes, by perfectly fine musicians, playing songs that have ABSOLUTELY nothing to do with the stories of the Hardy Boys. But, what was 60s rock n roll but only the best sugar coated escapism. It’s not healthy for a kid to live under a blanket with a flashlight, reading stories that inspire anxiety no child that age should ever have to experience. Balance it out with some good ol’ rock n roll. 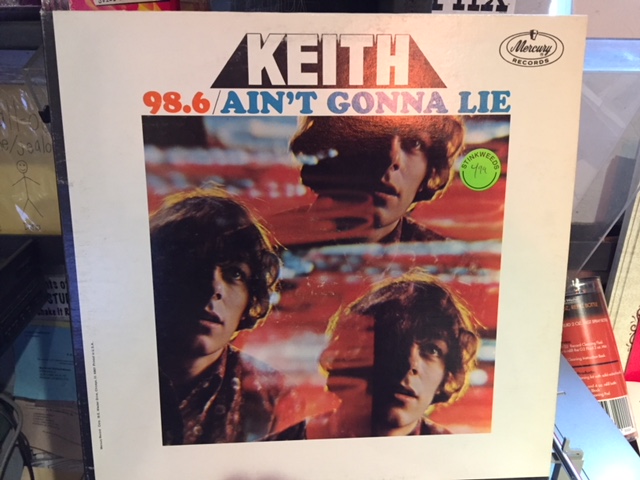 Now, some of you are sure to be familiar with Keith and his breakout hit 98.6. You might even hear this one on the “Oldies” station, from time to time. And, if you’ve heard it once, you know it forever. It’s just a perfectly catchy tune with a chorus that’s just weird enough to stick in your head. As a kid I was sure it was a song about a radio station and that seemed perfectly reasonable. It wasn’t till sometime later in life that I learned that 98.6 refers to our natural, healthy body temperature. But still, I was maybe a little to young to get the symbolism. Anyway, point of the story is, anything this thought provoking is sure to stick in your head. But, what of the other songs of Keith? I’ll admit. Listening to this album, I can’t recall ever hearing any of these tunes. But, that’s not to say this isn’t a great album. It’s in that popular style of 60s palatability. The songs and production are similar to that of early Scott Walker records, but perhaps lacking the brooding, heartfelt presentation. I suspect two things happened to Keith and his career. One: that song was just too good for it’s own good. Like being “Luke Skywalker” it’s hard to move forward from that. Two: maybe if you want to keep the attention of the public, think of a name to represent your music that isn’t so pedestrian. If someone told me I should listen to Keith, I would probably think “I’m sure you’re stepdad’s music is great…but I’m all set.” (no offense to our customers named Keith. You are amongst our favorite customers.) 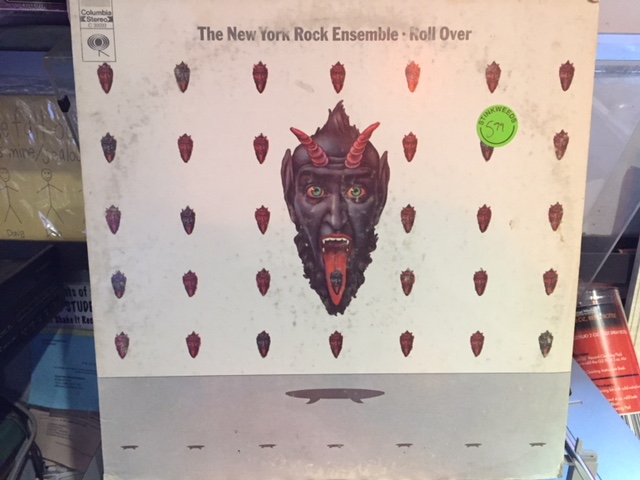 Some bands inexplicably fade into obscurity, with little to no reason. The New York Rock Ensemble had all the elements of success, including actual success! They were innovative right at a time in rock when innovations was all the rage. The songs are catchy, smart, cool and loud. I mean, look at this album cover! How is this not featured in “Greatest Album Covers” books. But, somehow most people discover their music the same way I did…by chance. This is sitting in our “bargain” bin for $5.99 and has been for some time. It has been passed over multiple time for Hall & Oats records and similar bands like Blue Oyster Cult and Emerson Lake and Palmer. Perhaps we have another case of bad branding. Perhaps The New York Rock Ensemble is too square of a name for such a band. I mean, there’s a story that Leonard Bernstein himself asked that the band appear at his Young People’s Concert. Perhaps the name implied that this band could be the bridge between the straight laced world of orchestral music and rock n roll. Sure, there are elements of classical music, but I wouldn’t consider it to be that bridge. But, it does go to show that there is quite a bit in a name. 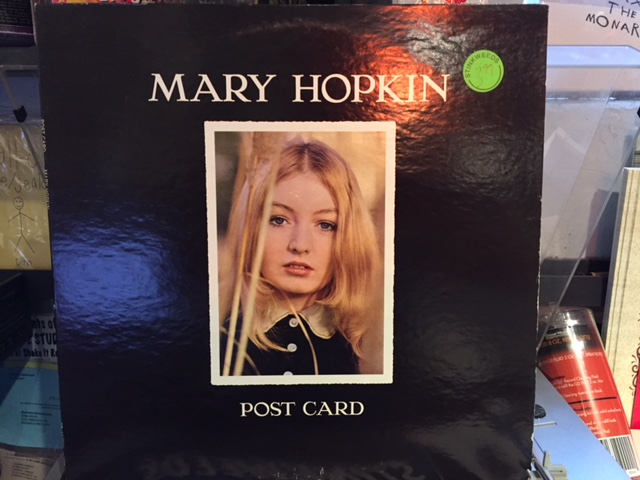 This one is always a surprise when I see it sitting in our bargain bin, undiscovered. Mary Hopkin was one of the first artist to release an album on the Beatles-run “Apple” label. Post Card was produced by Sir Paul McCartney, himself and features photos by Linda McCartney. Musically, its perfect British folk from the era. It’s maybe not as interesting as Nick Drake or Vashti Bunyan. But, it holds up to its contemporaries, for sure. She had what one might consider a sleepy career, later on, never releasing any major hits, but featuring her vocals on several popular albums, including David Bowie’s Low. But, even on the surface, this just seems like an album that would catch someone’s attention, especially priced as low as it is! Where I might offer an explanation for a lot of these overlooked albums, I have no explanation for this one. 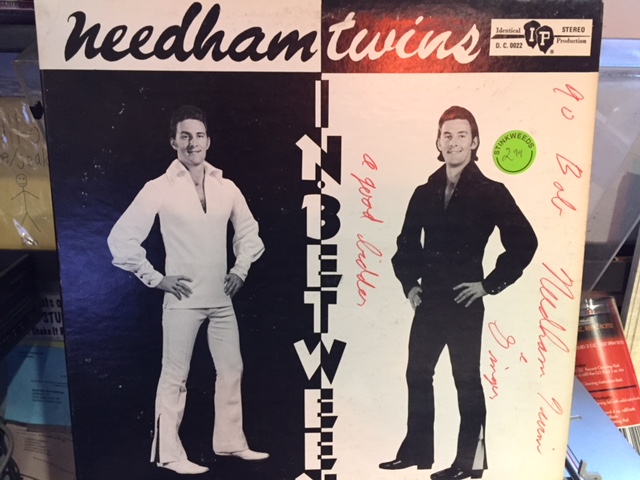 Needham Twins – In Between

Now, this is why we have this series. The real gems of the obscure are those with a “home made” appeal. These are the albums that were experienced by so few and those few likely had a strong connection to the music and the artists who created it. This is an album that was bought by friends and family and perhaps those few who experienced these songs live, be it at veterans lodge, church, strip mall or street fair. There is little information about the Needham Brothers and their career, except to say that they were, at least up until recently, still at it. Youtube reveals recent concerts performed at Swap meets for a smattering of adoring fans and passers by. I’m always tempted to send a message to let these artists know that their music has not been lost forever, but not knowing how that sort of thing might be received, I choose to just enjoy in my own way, on my own terms.

This relates to a specific question we get at the shop, from time to time. Bands will often ask if they should put out their album on CD/LP, as opposed to just a download. I always enthusiastically say YES! But, this answer isn’t coming from a place of obvious bias (as a record store clerk). It’s not even coming from a place of encouragement. My honest answer is, chances are your band is not going to be around forever. Chances are you might not even sell through the 400 copies you had printed. If I’m wrong, awesome! Good for you for beating the odds. But, if I’m right and you let your music fade out into the ether by only releasing it as a download, then you have robbed your music the chance of a new and very special kind of life. To be the album that finds its way into the bargain bin, or to be discovered in the attic of a newly bought home is to present music in a way that most music can not and will not achieve. Your music will be some strange discovery. It will be without context and without preceded opinion. The person who chooses to give that album a chance is going to have a unique experience with art that is rare and underrated. It will be their music and they will feel that sense of personal ownership. Your songs will be mysterious, intriguing and worth the listen…even if they are terrible.