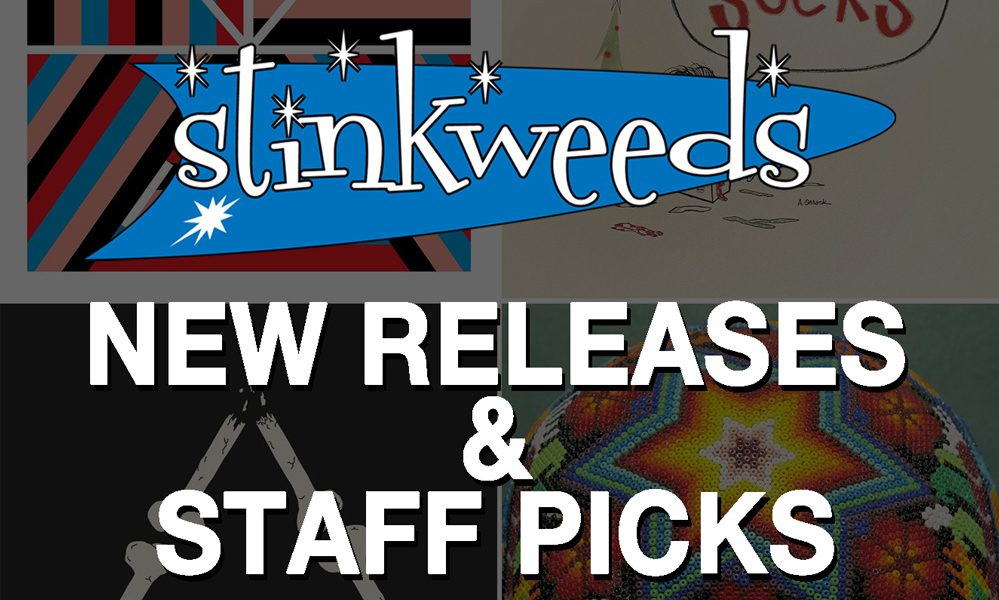 Rodney Crowell – Christmas Everywhere CD/LP (New West)
“A few years back, it became evident to my family, and indeed myself, that I’d gone sour on all things related to Christmas. Sometime around Christmas 2016 I came home to find my granddaughters, sitting side by side and playing on our old upright piano a melody that to my ear sounded like something from the early nineteenth century. I asked them what song they were playing and in unison they replied, ‘something we just made up.’ I hit record on my iPhone and asked them to play it again. Using their melody almost entirely, I spent a couple of months composing the words to ‘Come Christmas’. I was finally ready to record an album of original Christmas songs. With Dan Knobler producing and some very gifted musicians and vocalists lending their talents, the making of the album Christmas Everywhere ranks as some of the most enjoyable recording sessions I’ve ever experienced.” – Rodney Crowell

Dead Can Dance – Dionysus CD/2xLP+CD (PIAS America)
Dead Can Dance’s new album took shape as Brendan Perry became fascinated by long established spring and harvest festivals that had their origins in Dionysian religious practices throughout Europe. Dionysus brings to the fore the rites and rituals that today continue to be informed by the Greek god. The album’s seven movements, in the form of an oratorio, represent different facets of the Dionysus myth and his cult. As with the rest of the Dead Can Dance catalog, rhythms inspired by world traditions play a key role, with tracks seeming less like songs and more like fragments of a cohesive whole. Perry blends all of the album’s elements together using field recordings and chanting, including a goatherd in Switzerland, beehives from New Zealand, and bird calls from Mexico and Brazil. Perry uses this not only to invoke the album’s atmosphere and symbolic references but also to demonstrate how music can be found everywhere.

Marianne Faithfull – Negative Capability CD/LP+CD (BMG)
Negative Capability (a title borrowed from Romantic poet John Keats) is Marianne Faithfull’s 21st album of her 54-year recording career. Facing down arthritis and bolstered by collaborators including Warren Ellis, Nick Cave, Rob Ellis, Ed Harcourt and Mark Lanegan, Negative Capability is charged with brutal honesty and autobiographical reflection as she addresses losing old friends, the loneliness of living in her adopted city of Paris and still hoping love can come around. It includes the single “The Gypsy Faerie Queen” co-written with Nick Cave and covers of contemporaries The Rolling Stones (“As Tears Go By”) and Bob Dylan (“It’s All Over Now, Baby Blue”).

JD McPherson – Socks CD/LP (New West)
Featuring eleven original tracks written by JD McPherson and his friends, Socks is a collection of holiday songs sure to become standards while you are decking the halls or decorating the tree. Come get warm by the fire with songs such as, “All The Gifts I Need” and “Every Single Christmas”, or burn the cookies to the title cut and “Ugly Christmas Sweater”. There is something for everyone on this record to enjoy whether you are in the Christmas spirit or if you just wanna say, “Bah Humbug.”

The Prodigy – No Tourists CD/LP (BMG)
Original electronic music trailblazers The Prodigy are back with a new album. No Tourists is “ultimately about escapism and the want and need to be derailed. Don’t be a tourist – there is always more danger and excitement to be found if you stray from the set path” says Prodigy found and frontman Liam Howlett. The album was written, produced and mixed Howlett in his studio in London’s Kings Cross though this is – Liam notes – “very much a band album.” Members Maxim and Keef Flint are very much present and correct, each supplying their legendary vocal skills. Yes, there are one or two collaborators, but fundamentally this is the sound of the central Prodigy three, bringing their riotous sound to audiences old and new, two decades since their epochal album The Fat Of The Land. Expanding on the general shape of the project, Liam says: “this album is equally aggressive as the last records – but in a different way.” A musician, songwriter and studio maestro, Howlett is as rigorous and righteously up for it as he was when he formed his 28-years-young band. He explains that, as ever, the new songs “are built to play live.

Tenacious D – Post-Apocalypto CD/2xLP (Columbia)
Post-Apocalypto is an original, six-part animated video series from the minds of rock duo Tenacious D, comprised of Jack Black and Kyle Gass. Each frame of every episode was hand-drawn by Jack himself, with every character voiced by Black and Gass, and can be watched via Tenacious D’s YouTube page. True to the title, Post-Apocalypto finds Tenacious D thrust into a world of complete and utter destruction following the drop of an atomic bomb. Surviving the attack in classic cinematic fashion (a good old imperishable 1950’s refrigerator), the duo quickly learns that new forms of evil have spawned from the blast. One thing becomes apparent – for humanity to prevail, Tenacious D must save the world. All six episodes feature new Tenacious D songs, culminating in this new 21-track album of the same name.


Rosanne Cash – She Remembers Everything CD/LP (Blue Note)
Dreams still beckon in a damaged world, and Rosanne Cash renders them with fierce grace on her new Blue Note offering She Remembers Everything. The follow-up to Cash’s 2014 release The River & The Thread, the album offers shimmering pop – with hints of twang and jazz – that could find a home in almost any year of postwar American music. But the luminescence and bright production are shot through with a darker vision, trenchant vocals, minor chords, and bent notes that destabilize the landscape. Familiar yet alien, Cash’s take on being a woman in the world reveals just how much has gone awry.

Heaters – Suspended Youth CD/LP (Beyond Beyond Is Beyond)
Heaters are back! And on this, their fourth LP in as many years, we find their sound has aged like a fine wine.


Metallica ‎– …And Justice For All [Reissue/1988] CD/2xLP/Cassette (Blackened)
Remastered reissues of the fourth studio album by heavy metal icons – available across a variety of editions.

Georgia Anne Muldrow – Overload CD/LP+MP3 (Brainfeeder)
Typically working alone, the record flips that dynamic and takes Georgia out of her comfort zone for the first time since Seeds (2003) which was entirely produced by Madlib. Overload bears the fruits of numerous collaborations, most notably with duo Mike & Keys (50 Cent, Nipsey Hussle, Snoop Dogg, G-Eazy) who contribute production to four tracks including the sleek, anthemic title track alongside Khalil (Dr Dre). A modern soul classic in the making.

Paint – Paint CD/LP (Mexican Summer)
Paint (Allah-Las guitarist/singer Pedrum Siadatian) makes his mark with his first self-titled solo record. After Allah-Las 2016 Calico Review album he started 4-tracking his own strange ideas fed by the acid-bitter poetry and murky music of Kevin Ayers & Syd Barrett. He found a producer in Frank Maston who instinctively understood the songs would fall apart in the studio if scrubbed too hard. Paint’s first album isn’t always clean but it’s very, very clear: sometimes the mess is the message.

Doug Paisley – Starter Home CD/LP (No Quarter)
To make his first album in nearly five years, Doug Paisley stayed in his hometown of Toronto, Canada playing with old friends and collaborators, and recording in home studios around the city. He spent the previous few years writing, and Starter Home showcases an already brilliant songwriter getting even better. The songs are rooted in the sound of folk and country, but the themes are universal and expansive, not belonging to any genre. The recording itself is quiet, often only minimally adorned, showcasing Paisley’s incredible voice and guitar playing.

Part Time – Spell #6 CD/LP (Burger)
Nearing a decade old and with a discography reaching deep into double figures across several different labels (Mexican Summer, Burger, Plastic Response Records) David Loca’s work under the Part Time moniker really shouldn’t require any introduction. Nonetheless, the release of what is officially his sixth album, fittingly titled Spell #6, does signal something of a re-birth and provides a compelling entry point for anyone new to Loca’s prolific output. Whereas previous albums were notable for a charming lo-fi production, Spell #6 takes Part Time uptown.

Peter, Björn And John – Darker Days CD/LP (Ingrid)
The eighth studio album from the Swedish trio, Darker Days first began coming together in Stockholm at Atlantis Studios, where the songs were written in the immediate aftermath of Breakin’ Point. A concerted effort to, as a press release puts it, “strip away the noise,” however, has resulted in a careful, measured march towards a “composed and simple” album. The album’s construction began with the conjuring of its title, which Peter Morén, Björn Yttling and John Eriksson used as a jumping off point for their songs. Though composed separately, the songs each feature contributions from the individual members.

Bill Ryder-Jones – Yawn CD/LP+MP3 (Domino)
The 10 songs on Yawn, multi-instrumentalist, producer, string-arranger and composer Bill Ryder-Jones’ fourth studio album, are everyday stories about situations we all fall from and into, out of and back up against the wall again – and they are sung to us, up close, by a voice still in hock to a few uncomfortable truths. The album was recorded and produced entirely by Bill himself, with a little help from friends including guest vocals from The Orielles and Our Girl.


Tokyo Police Club – TPC LP (Dine Alone Music)
Recently released on CD – now available on vinyl. Tokyo Police Club return with their first full-length in four years. After putting aside the idea of splitting up and back-burnering their commercial expectations, TPC recaptures the energy of their early years and was built on camaraderie and esprit de corps. Favoring simple rhythms, slower tempos and drive over details, the band felt that there was only one person who could capture this liberation on tape – producer Rob Schnapf, whom the band worked with on 2010’s Champ.

Unwound – Leaves Turn Inside You [Reissue/2001] 2xLP (Numero)
The Unwound album that ended all Unwound albums. Recorded in a moldering farmhouse basement at the crest of the new century,  is the no-wave response to Spector’s wall of noise call. Infinite layers of choppy guitar stabs and bridge scrapes, guttural bass thronk, thrift store synths, and monotone chanting wash over suffocating rhythms to deliver the world’s only choral grunge LP. Remastered from the original analog tapes and pressed on heavyweight vinyl for the discerning noise-nik.