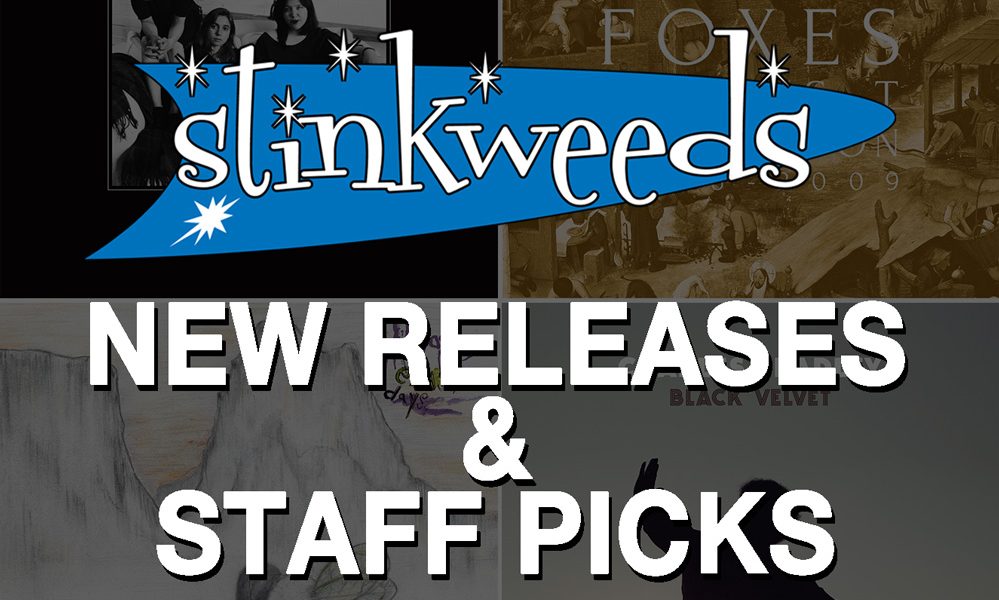 Charles Bradley – Black Velvet CD/LP/LP+12”+MP3 (Daptone/Dunham)
Black Velvet is a celebration of Charles Bradley, lovingly assembled by his friends and family at Dunham/Daptone Records. Though chronologically the material spans Charles’ entire career, this is no anthology, “greatest hits” or other shallow rehashing of the songs that already made him famous. Rather, this album is a profound exploration through the less-traveled corners of the soulful universe that Charles and his longtime producer, co-writer and friend Thomas “TNT” Brenneck created in the studio together over their decade-long partnership. It features new songs recorded during the sessions from each of his three albums, heard here for the very first time in all their scorching glory. [As a one-time pressing for the super-fan comes a gorgeous black velvet wrapped box set that includes the following: 180gm vinyl version of the standard LP, a bonus 12” 45rpm EP with stripped-down mixes of four Bradley classics, an exclusive slip-mat, two printed heavy-duty inner sleeves sporting a surreal painting of Charles and the interview in which he explains the origin of the painting, a 12” x 12” photo-book with extensive liner notes from TNT, an exact replica of Charles’ original “Black Velvit” business card, and a seeded download card (once you’ve retrieved your download, you can plant the card and wildflowers will grow in memory of Charles).]

Marianne Faithful – Come And Stay With Me: The UK 45s 1964-69 CD (ABKCO)
The A and B-sides of the ten singles Marianne recorded for UK Decca between 1964 and 1969, plus her Go Away From My World EP. All tracks are in authentic mono, just like the actual 45s. Mastered from the best possible sources, including some fresh Abbey Road transfers of the original tapes. The CD features Marianne’s Top 20 hits “As Tears Go By”, “Come And Stay With Me”, “This Little Bird” and “Summer Nights”, plus lesser-known gems such as “Something Better”, “That’s Right Baby”, “House Of The Rising Sun”, “Counting” and the controversial cult favorite “Sister Morphine”. Producers include Andrew Loog Oldham, Mike Leander, Tony Calder and Mick Jagger.

Laura Jane Grace & The Devouring Mothers – Brought To Rot CD/LP+MP3 (Bloodshot)
To say Laura Jane Grace has had a defiant career would be an understatement. Whether being accused of leaving the DIY punk scene to pursue a major label career over a decade ago, or courageously challenging people’s conceptions of gender identity, Grace has remained a daring and influential cultural figure in her over 20+ years of creating dynamic art across various mediums. Now she presses pause on Against Me! to release a more intimate singer-songwriter leaning solo album under the name Laura Jane Grace & The Devouring Mothers. On Bought To Rot’s opening cut, “China Beach”, Grace delivers a bold, lip-curled statement of intent: “Learn to trust yourself, no one else matters / Respect the source and always welcome failure.” And it’s in this spirit – with the help of Against Me! drummer Atom Willard and long-term AM! producer Marc Jacob Hudson on bass – that the album came into existence. As a complete body of work, Brought To Rot Grace what she affectionately calls her “Scorpio” record – redolent in sex, drugs, and rock ‘n’ roll. [Limited white colored vinyl pressing also available.]

J Mascis – Elastic Days CD/LP+MP3 (Sub Pop)
“Like its predecessors, Elastic Days was recorded at J’s own Bisquiteen studio. Mascis does almost all his own stunts, although Ken Miauri (who also appeared on Tied To A Star) plays keyboards and there are a few guest vocal spots. These include old mates Pall Jenkins (Black Heart Procession), and Mark Mulcahy (Miracle Legion), as well as the newly added voice of Zoë Randell (Luluc) among others. But the show is mostly J’s and J’s alone. But for those expecting the hallucinatory overload of Dinosaur Jr’s live attack, the gentleness of the approach here will draw easy comparisons to Neil Young’s binary approach to working solo versus working with Crazy Horse. This is a lazy man’s shorthand, but it still rings true. Elastic Days brims with great moments. Epic hooks that snare you in surprisingly subtle ways, guitar textures that slide against each other like old lovers, and structures that range from a neo-power-ballad (“Web So Dense”) to jazzily-canted West Coasty post-psych (“Give It Off”) to a track that subliminally recalls the keyboard approach of Scott Thurston-era Stooges (“Drop Me”). The album plays out with a combination of holism and variety that is certain to set many brains ablaze.” – Byron Coley

Rhett Miller – The Messenger CD/LP+MP3 (ATO)
The Messenger sees Rhett Miller playing it faster and looser than perhaps any other time in his quarter century career, instilling what might be his most personal songs to date with a groovy limberness that belies the reflective darkness within. Backed by a white hot backing combo comprised of Sam Cohen (electric & acoustic guitars, pedal steel, piano, organ, drums), Brian Betancourt (bass), and Ray Rizzo (drums), Miller goes deep into his own youthful experiences with suicide and depression, placing “a long distance phone call to myself as a 14-year-old” on surprisingly buoyant new songs like “The Human Condition” and “Permanent Damage”. [Limited clear with black smoke colored vinyl pressing also available.]

The Revivalists – Take Good Care CD/LP+7” (Loma Vista)
Marked by songwriting that is both intensely personal and also an escape, Take Good Care is brimming with sonic complexity, celebration, and catharsis. Sometimes raising more questions than answers, it’s a reflection of the up-and-down journey of life that we’re all on together.

Meg Baird and Mary Lattimore – Ghost Forests CD/LP (Three Lobed)
Ghost Forests‘ musical conversations between Meg Baird and Mary Lattimore are intimate, fluid, effortless and spontaneous. They’re filled with the euphoria of creation and, at times, they articulate hard truths and tangled emotions with an ease only trusted friends can manage. The songs alternate between extended ethereal instrumental excursions, gauzy and dreamy pop, blown-out Bull Of The Woods heavy haze, and modern re-imaginations of epic traditional balladry all while touching on the strange and otherworldly places between these stations.

The Beatles – The White Album [Reissue/1968] 3xCD/2xLP/4xLP (Capitol)
For 50 years, The White Album has invited its listeners to venture forth and explore the breadth and ambition of its music, delighting and inspiring each new generation in turn. The Beatles have now released a suite of lavishly presented White Album packages, including an expanded 3xCD and 4xLP package. The album’s 30 tracks are newly mixed and remastered by producer Giles Martin and mix engineer Sam Okell on two CDs (standard double 180gm vinyl LP pressing featuring this new stereo mix is available) and features a third CD of the Esher Demos. A Super Deluxe expanded 6xCD + Blu-ray package featuring 5.1 surround audio, 27 early acoustic demos and 50 session takes, most of which are previously unreleased in any form, is also available.

Grapetooth – Grapetooth CD/LP+MP3 (Polyvinyl)
Concocting a freshly strange blend of synth pop and damaged folk music, Grapetooth is a band from Chicago, IL consisting of Chris Bailoni and Clay Frankel. Their eponymous debut captures a feeling the duo happily felt was somewhere between the doomy disco of ‘80s new wave and the woozy laments of artists like Arthur Russell and Jeff Cowell.

La Dispute – Somewhere At The Bottom Of The River Vega And Altair [Reissue/2008] CD/2xLP (No Sleep)
La Dispute’s biting 2008 debut full-length is the culmination of sleepless nights and exhausting recording sessions. It was the product of a young band with an unyielding persistence that bordered on outright psychosis. As a result, the frantic guitar, unexpected time signatures and emotive vocal work has stood the test of time and remained an influence across the post-hardcore and emo scenes. [Limited colored vinyl pressing also available.]

Jon Spencer – Spencer Sings The Hits! CD/LP (In The Red)
Often imitated, never duplicated, the original NYC underground-rock legend Jon Spencer returns from the wilderness with 12 red-hot hits. This is the truth serum America has been craving, the beginning of a rock ‘n’ roll rebellion that takes no prisoners and puts the squares on ice. A wizard’s brew of rhythm and blues and subversive dance grooves, weaponized with sci-fi skronk and industrial attitude, calibrated for the Revolution, a Molotov cocktail of sound guaranteed to destroy any post-modern hangover. [Limited purple marbled colored vinyl pressing also available.]

Boygenius – Boygenius 12”+MP3 (Matador)
Julien Baker, Phoebe Bridgers, and Lucy Dacus formed Boygenius after booking a tour together, but the trio had subconsciously been in the works for longer than that. Through a series of tours and performances and chance encounters that led to friendships – including Bridgers’ and Dacus’ first in-person meeting backstage at a Philadelphia festival, greenroom hangouts that felt instantly comfortable, and a couple of long email chains – the lyrically and musically arresting singer-songwriters and kindred spirits got to know each other on their own terms. With gut-wrenchingly personal yet easily relatable verses and spare, lilting melodic arrangements, all three are leading a new rock vanguard that values unflinching self-awareness and unassailable songcraft.

The Men – Hated 2008 – 2011 2xLP Sacred Bones)
NYC’s The Men have made a name for themselves as wayfaring musicians, constantly evolving and eluding their listeners. Before they were genre-hopping through country, post-punk, noise rock, and more, they were applying that experimental nature within the more confined space of punk. Within that genre they were wildly adventurous, playing noise shows, hardcore shows, rock shows, and switching up the instrumentation as they saw fit, while always operating within a general punk ethos.

Yann Tiersen – Hent LP (Mute)
Following the release of his ninth studio album (and his first solo piano album), EUSA, Yann Tiersen returns with Hent. A must have for Yann enthusiasts and anyone interested in improvisational classical music.