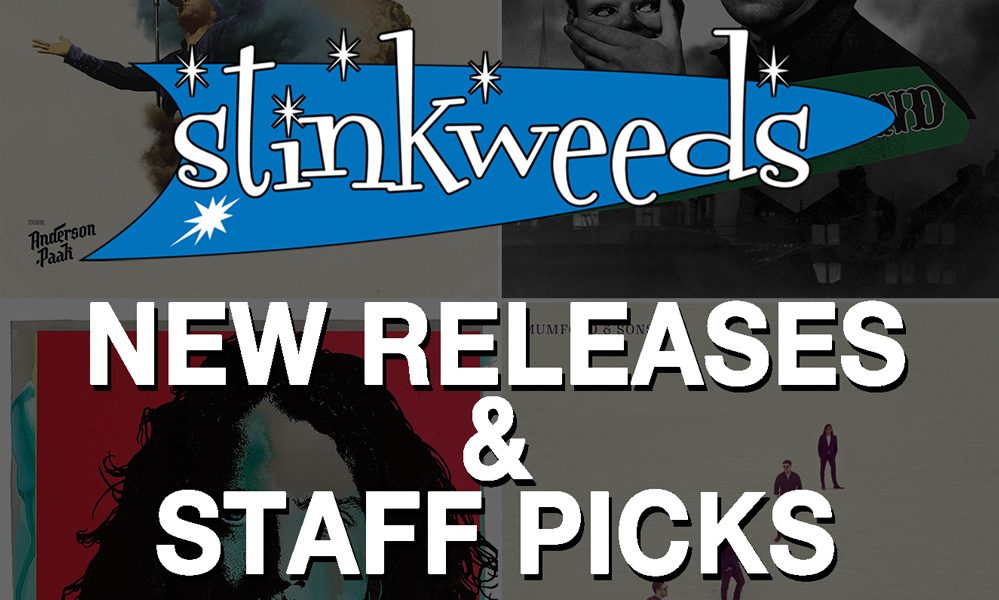 Anderson .Paak – Oxnard CD (Aftermath)
The third album from California hip hopper, Anderson .Paak serves as his first release on Dr. Dre’s Aftermath label. The album’s title is a homage to Anderson’s hometown. It is also a continuation of the theme which .Paak has been using for some years, which is naming his projects after coastal towns of California. Earlier this year, he shared with Rolling Stone that “… this is the album [he] dreamed of making in high school, when [he] was listening to [Jay-Z]’s The Blueprint, The Game’s The Documentary, and [Kanye West’s] The College Dropout.” Guests include Kadhja Bonet, Norelle, Kendrick Lamar, Dr. Dre & Cocoa Sarai, Pusha T, Snoop Dogg & The Last Artful Dodgr, J. Cole, Q-Tip, and BJ The Chicago Kid. [Vinyl edition due 2019.]

The Good, The Bad & The Queen – Merrie Land CD/LP (Studio 13)
Merrie Land is the second album from The Good, The Bad & The Queen, a band comprising of Damon Albarn, Paul Simonon, Tony Allen and Simon Tong. Produced by Tony Visconti and the band, and completed in London and Wales in 2018, during the current ongoing period in which the UK is preparing to leave the European Union, Merrie Land is a questioning good-bye letter, a series of observations and reflections on Britishness in 2018. The album sees the band’s focus move beyond London with a beautiful and hopeful paean to the Britain of today – an inclusive Britain – and the possibilities of the future. In the band’s own words, Merrie Land is a ten-song lament of Anglo-Saxosentialism marking the reluctant end of a relationship, and about picking up the pieces and seeing what can be salvaged. The band set a beautifully muted palette and lustrous finish to bring out a mood that is bruised yet unapologetically defiant and optimistic, and carries the underlying message: we will survive. In times of metaphysical trauma, the people need to forge ahead and wear armor. Here it is, set to the mood music of a nation about to be broken yet undefeated. [A deluxe edition box set featuring colored LP and CD versions of the album, a 56-page A4 hardback book, a hand-printed wood cut, a screen print, postcards, and bonus tracks is available. Limited indie-exclusive green colored vinyl pressing available as well.]

Mark Knopfler – Down The Road Wherever CD/2xLP/3xLP+CD (Blue Note)
Down The Road Wherever features 13 unhurriedly elegant new Mark Knopfler songs inspired by a wide range of subjects including his early days in Deptford with Dire Straits, a stray football fan lost in a strange town, the compulsion of a musician hitching home through the snow, and a man out of time in his local greasy spoon. The album stays true to the folk and roots-inflected ambience of his previous solo albums and introduces new elements of jazz, funk and even a hint of the rockier leanings of earlier days. Knopfler has a poet’s eye for telling details that infuse his songs with his unique psychogeography – “where the Delta meets the Tyne” as he describes it – and his warm Geordie vocal tone and his deft, richly melodic guitar playing are as breathtaking and thrilling as ever.

Mumford & Sons – Delta CD/2xLP (Glassnote)
Since the release of Wilder Mind in May 2015, and the collaborative Johannesburg mini-album in the summer of 2016, Mumford & Sons have found a rich, prolific vein of form in the writing for the Paul Epworth-produced Delta. Where Wilder Mind harnessed a widescreen electric sound that seemed custom built to be belted back to them from the festival main stages, Delta loses none of that sense of scale, but couples it with an intimacy that has so successfully combined to make Mumford & Sons one of the biggest bands of recent years. Delta is a record of differing shades, colors and textures. It’s also a record that marks ten years since Mumford & Sons formed and draws on that shared experience of being on and off the road. It’s a moving collection of songs perhaps more intimate and expansive, both lyrically and musically, than ever before. Introspective and reflective but married with those ecstatic stadium-sized dynamics.

The Beta Band – Hot Shots II [Reissue/2001] CD/2xLP+CD (Because Music)
Touring extensively and supporting Radiohead in August 2002, The Beta Band made No. 3 on Q magazine’s list of 50 Bands to See Before You Die. CD version comes in a three-panel digi-sleeve with a 12-page poster booklet. [Limited colored vinyl pressing also available.]

Black Eyed Peas – Masters Of The Sun CD (Interscope)
New album from will.i.am and crew, their first in eight years. A political album loosely inspired by the graphic novel of the same name and the contemporary social climate of the United States, it is a departure from The Black Eyed Peas’ electronic dance and pop-influenced albums The E.N.D. and The Beginning, marking a return to the group’s hip-hop and boom bap style of their early career. 12 new tunes including “Back 2 Hiphop” featuring Nas.

Chris Cornell – Chris Cornell CD/4xCD/2xLP/4xCD+7xLP+DVD (UMe)
A new collection that commemorates Chris Cornell’s life and legacy compiled by his widow Vicky, who worked extensively with Chris’ bandmates. Includes selections culled from the deep catalogs of his three influential bands – Soundgarden, Temple Of The Dog and Audioslave – as well as songs from his solo career. [Deluxe four-CD edition includes 64 tracks including 11 unreleased recordings. The Super Deluxe box includes the 64-track set on CD plus a 7xLP version and a 22-track DVD comprised of 24 videos.]

Dan Mangan – More Or Less CD/LP (Arts & Crafts)
More Or Less is about “witnessing birth, and in some ways rebirth,” says Dan Mangan. “It’s about feeling disconnected from a popular identity and becoming acclimated to a new one. It’s about raising kids in a turbulent world. It’s about unanswerable questions and kindness and friendship and fear.” It is an album that Mangan claims “feels more like ‘me’ than ever. More sparse. Less meticulous. More kids. Less time. More direct. Less metaphor. More discovery. Less youth. More warmth. Less chaos.” In the years since 20-year-old Dan Mangan began boxing his way into the corner of every noisy bar that would let him bring in his guitar he’s released four other albums, toured relentlessly, won a few awards, found a partner who tolerated his schedule, married that partner, then welcomed a baby into their home…which is when things changed.

Sufjan Stevens – The Greatest Gift [Reissue/2015] CD (Asthmatic Kitty)
The Greatest Gift is a mixtape of outtakes, remixes and demos from Sufjan’s 2015 album Carrie & Lowell. Already on vinyl and digital, the mixtape arrives on CD for the first time.

Tomorrow’s Tulips – Harnessed To Flesh CD (Burger)
Intoxicatingly simple and ear catching, “Tomorrows Tulips lay down a sonic atmospheric of ultra-mellow southern California low-fi dream pop played and sung in the lower registers with limited and pleasingly repetitive chord changes that move across the room like the afternoon sun, highlighting bits of dust slowly dancing through the air by the smallest breeze, and causing your eternally sleeping cat to stretch out even more comfortably on his back.” – It’s Psychedelic Baby [Vinyl edition due December 14.]

Various Artists – Brainfeeder X 2xCD/4xLP (Brainfeeder)
L.A.-based label Brainfeeder is celebrating 10 years of cutting-edge releases with Brainfeeder X, a 36 track compilation. The set features a split selection of tracks from previously released material and unreleased, new music. The label of Flying Lotus has been home to a wide range of electronic, jazz, rap and funk over the last decade and has been instrumental in the careers of Kamasi Washington, Thundercat, Teebs, Lapalux and many more.

Drake – Scorpion 2xLP (Republic)
Released last July on CD – now available on vinyl. The 25-track fifth studio release for the Canadian hip-hop artist features guest appearances from Jay-Z and Ty Dollar $ign as well as vocals from Michael Jackson and Static Major. “Drake aims to come out stronger, more focused and more righteous than ever. … He goes hard at addressing his industry ops on Side A, and it’s full of the effortlessly cut-throat Drake we’ve come to love. … Drake gets all the way into his feelings on the second half of Scorpion.” – Exclaim

Idles – Joy As An Act Of Resistance LP (Partisan)
Standard black vinyl pressing. Joy As An Act of Resistance is the follow up to Bristol, UK five-piece Idles’ debut album Brutalism, self-released in 2017. Produced by Space and mixed by Adam Greenspan and Nick Launay (Nick Cave, Kate Bush, Yeah Yeah Yeahs), the 12-track collection takes aim at everything from toxic masculinity, nationalism, immigration, and class inequality – all while maintaining a visceral, infectious positivity. Singer Joe Talbot summarizes: “This album is an attempt to be vulnerable to our audience and to encourage vulnerability; a brave naked smile in this shitty new world. We have stripped back the songs and lyrics to our bare flesh to allow each other to breathe, to celebrate our differences, and act as an ode to communities and the individuals that forge them. Because without our community, we’d be nothing.”