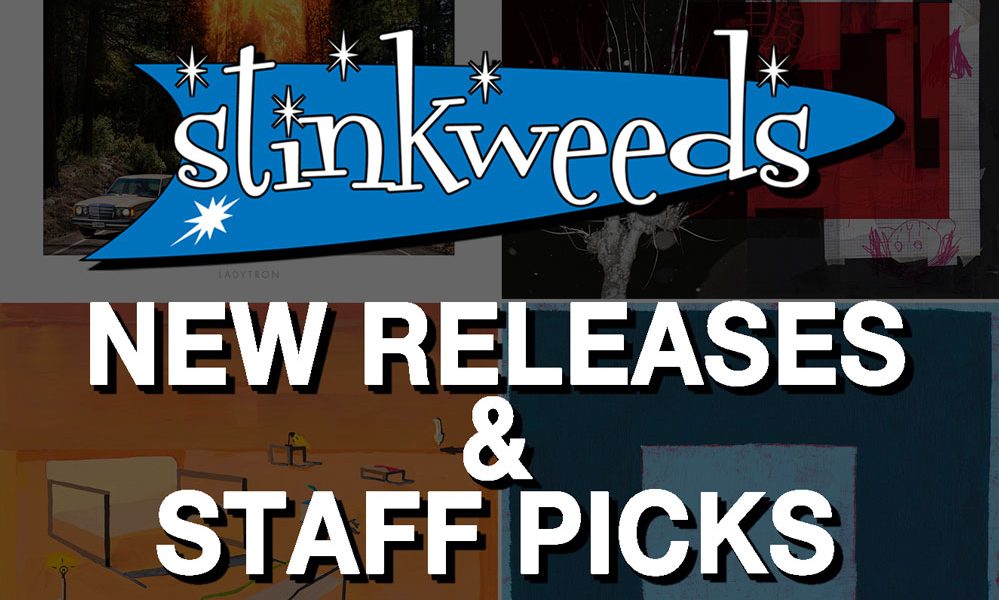 Ryan Bingham – American Love Songs CD/2xLP (Axster Bingham)
Ryan Bingham’s sixth studio album, American Love Song, finds the South Texas bred singer/songwriter honing his creativity on two distinct levels, the personal and the cultural. He co-produced it with Charlie Sexton, the superb Austin guitarist who has played for years in Bob Dylan’s touring band. From the opening track – the spry “Jingle And Go”, which recounts his early years as an itinerant open-mic performer working, like the great Texas bluesmen before him, for tips – to the closer, “Blues Lady”, a tribute to Janis Joplin, Aretha Franklin, Bingham’s own late mother, and all the other strong women this country has produced, the album combines autobiographical reflection with a bittersweet celebration of our collective spirit in the face of enduring difficulties.

Hayes Carll – What It Is CD/LP (Dualtone)
On What It Is, Houston, TX troubadour Hayes Carll is leaving the past behind. “I want to dig in so this life doesn’t just pass me by. The more engaged I am the more meaning it all has. I want that to be reflected in the work,” Carll says. What It Is continues the artistic risk-taking initiated by 2016’s Lovers And Leavers; his voice is strong and assured, and his songwriting as truthful as ever. On the rambunctious, fiddle-punctuated, “Times Like These”, he laments political division in America while delivering a rapid-fire plea to “do my labor, love my girl, and help my neighbor, while keeping all my joie de vivre.” Carll’s signature cleverness and aptitude for so-personal-you-might-miss-it political commentary is as strong as ever. The stark, “Fragile Men”, co-written with singer-songwriter Lolo, uses humor and dripping sarcasm to examine his gender’s resistance to change in less than three minutes of string-laden, almost Jacques Brel invoking drama. It’s new musical territory for Carll, and the result is powerful. His voice is strong and resonant on these songs, and it’s thrilling to hear him use it with a new authority. He is alternately commanding and tender, yet always soulful.

Perfect Son – Cast CD/LP+MP3 (Sub Pop)
Sometime in 2016, just as the Polish singer/producer Tobiasz Biliński began to find success through the dim and fractured electropop of Coldair, he knew it was time for a radical change. The songs on The Provider, Coldair’s much-lauded second album, had been an exorcism of sorts. Laced with songs about early death, chronic disappointment, and clouded minds, the record was, as he puts it now, his earnest attempt to “get all this old sh*t out.” That mission accomplished, he needed something new, a restart – the unabashedly radiant and unapologetically complex pop of Perfect Son, delivered in 10 perfect shots on Cast. In the past, Biliński’s music has flirted with and explored the darkness, first in a sort of Transatlantic freak-folk and then with the gothic refractions of Coldair. But on Cast, Perfect Son steps boldly into the light without sloughing off emotional weight or depth. With powerful, sweeping production that recalls the best pop beats of Matthew Dear and arcing melodies that conjure the majesty of Shearwater, Perfect Son animates sensations of lust, belonging, and newfound trust with tumescent electronic arrangements that threaten the safety of any sound system.

Tedeschi Trucks Band – Signs CD/LP+7” (Fantasy)
Signs is the fourth studio release from Tedeschi Trucks Band and offers another outstanding example of the Grammy-winning 12-piece juggernaut’s ability to expand musical boundaries in ways that only a rare caliber of musician can achieve. A new high-water mark in their recording career, Signs showcases the band at their best – combining inventive musicality and provocative lyrics across eleven original tracks, penned by the group and a few dear friends, running the gamut from uplifting soulful anthems, to bittersweet ballads and driving rock and roll. NPR Music calls lead single “Hard Case” an “upbeat, shuffling instant classic.”

Piroshka – Brickbat CD/LP (Bella Union)
Piroshka is a new chapter from former Lush vocalist/guitarist Miki Berenyi, former Moose guitarist KJ ”Moose” McKillop, Modern English bassist Mick Conroy and former Elastica drummer Justin Welch. The quartet’s thrilling debut album, Brickbat, is named after the word for a missile, which nails the record’s heavyweight lyrics if not the music’s gorgeous, bittersweet and euphoric pop. Think of Brickbat as a wolf in sheep’s clothing. The name Piroshka is taken from the Hungarian take on Little Red Riding Hood. Though Brickbat kicks off with a squeal of feedback, the album is far from a proper punk record, with as much sublime delicacy as physical force. They bring guitars to the fore but also electronic flourishes in all manner of spaces.

Yann Tiersen – All CD/LP (Mute)
All is the first album to be recorded at Tiersen’s new studio, venue and community center, The Eskal Project, built in an abandoned discotheque on the island of Ushant, a small island positioned in the Celtic sea between Brittany and Cornwall, Tiersen’s home for the past 10 years. The album, mixed by Gareth Jones, continues the themes of environment and a connection to nature first explored on EUSA, incorporating recordings from outside of Brittany, such as the redwood forests of California as well as field recordings from Tempelhof airport in Berlin (on “Tempelhof”), and guest vocalists.

Homeshake – Helium LP (Sinderlyn)
Over his first three albums, Homeshake’s Peter Sagar followed his own idiosyncratic vision, a journey that’s taken him from sturdy guitar-based indie-pop to a bleary-eyed take on lo-fi R&B. Now, with Helium, Sagar is putting down roots in aesthetic territory all his own.

Hot Water Music ‎– A Flight And A Crash [Reissue/2001] LP+MP3 (Epitaph)
Hot Water Music ‎– Caution [Reissue/2002] LP+MP3 (Epitaph)
A Flight And A Crash is a sonic exploration of the pain and triumph of life with an energy and emotion seldom heard. With some of the most intricate yet hard-driving rhythms the band has ever produced, this album pulls at your gut, head and heart all at the same time. It’s easy to see why Magnet magazine called them “the best punk band on the planet” at the time. With a unique blend of heartfelt punk, guttural rock, and explorative neo-hardcore, Hot Water Music shirks categorization on follow-up Caution.

Pinegrove – Skylight 2xLP (Pinegrove)
“Completed in 2017 and shelved for almost a year, Pinegrove’s third record is smaller, softer, and closer to the chest. Recorded and produced by Hall and guitarist Sam Skinner at a house in upstate New York, Skylight focuses on atmosphere and abstraction. While Cardinal was defined by anthemic eruptions of longing, these 11 songs move patiently and often disregard verse-chorus song structures in favor of loose vignettes.” – Pitchfork