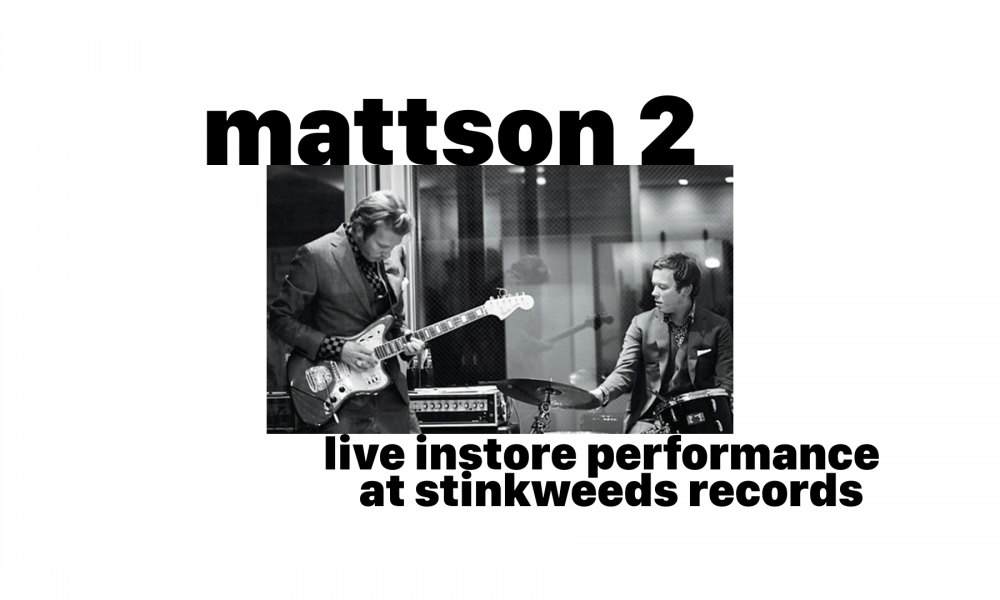 Join us on Monday, March 4th for an intimate, live instore performance from southern California jazz genre bending duo, The Mattson 2.
This performance is absolutely free and will be followed by a full set at The Rebel Lounge, that evening, with Kikagaku Moyo. We have tickets available at Stinkweeds.

WE WILL BE RAFFLING OFF TWO TICKETS, AVAILABLE TO ANYONE ATTENDING THIS IN-STORE!

Check out our facebook page for any updates or to RSVP.

“If you could soundtrack the jangle of the sea and the jazz of the surf, The Mattson 2 would most certainly be the composers. The identical twin guitar and drums duo are truly a marvel of jazz-rock orchestration and arrangement. The duo shimmers and shakes with the soaring modern wizardry of Jared Mattson’s untamed, layered guitars and Jonathan Mattson’s tribal jazz hard-bop drumming. They channel the gorgeously hypnotic gods of surf, sun, and neon-punk-jazz of our modern universe, evoking evolved realms of experimentalism, rhythm, and story. The identical twin’s deep telepathic kinship navigates colorful forms of beautiful weirdness and exotic landscapes of layered improvisation, transcending the concept of modern musical performance. They have toured relentlessly throughout Japan, Brazil, Paris, Spain, Portugal, Denmark, Finland, The Netherlands, and the United States. The Mattson 2 have Bachelor’s and Masters of Fine Arts degrees in music from University of California San Diego, and University of California Irvine respectively. Mattson 2 have collaborated/shared the stage with Chaz Bundick, Toro Y Moi, Badbadnotgood, Ray Barbee, Tommy Guerrero, Cornelius, Chocolat & Akito Katayose, Silver Apples, Money Mark, Thomas Campbell, Nicole Mitchell, Mark Dresser, Farmer Dave Scher, and Tortoise members Jeff Parker, John Herndon, and John McEntire.”