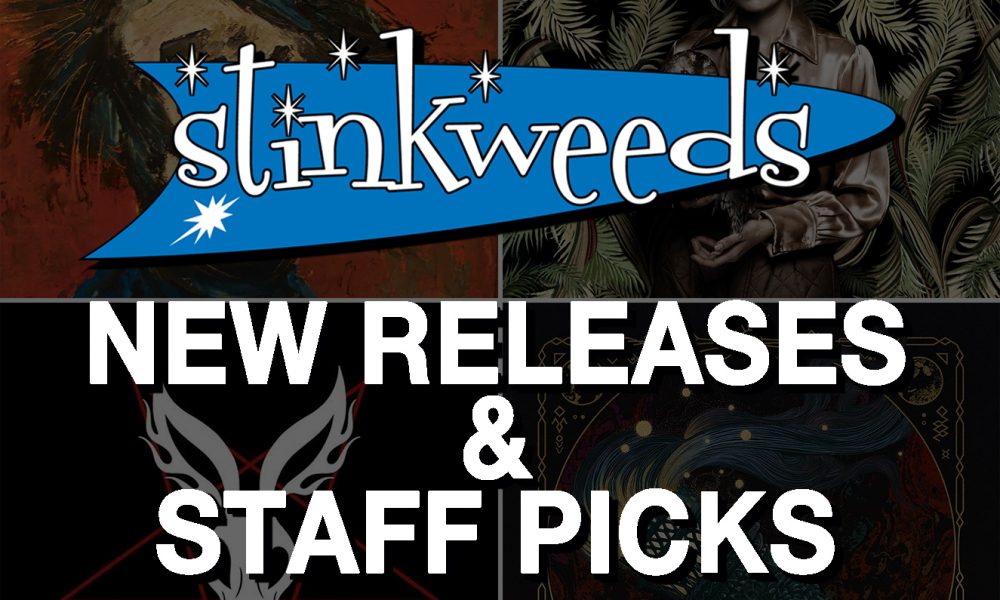 Atmosphere – The Day Before Halloween LP (Rhymesayers)
For over two decades, Atmosphere has maintained a course of rigorous output, releasing over two dozen studio albums, EP’s and collaborative side projects in as many years. In that time, the venerated duo have built a legacy out of bringing honesty, humility and vulnerability to the forefront of their music, continually challenging themselves to evolve without straying too far from their Minneapolis hip-hop roots. Atmosphere’s new album, The Day Before Halloween, is something of a detour. Cutting loose and eschewing their established norms, Slug and Ant have delivered the anti-pop answer to the content and compositions of previous albums. Over razor-sharp drums and distorted synths, The Day Before Halloween explores the life of a visual artist living in an antiquated surveillance state. [CD edition due November 13.]

Oneohtrix Point Never – Magic Oneohtrix Point Never CD/2xLP (Warp)
Oneohtrix Point Never returns with the new album, Magic Oneohtrix Point Never. It is the fourth full-length for Warp Records and follows his last, Age Of LP (2018). The eponymous title is taken from Daniel Lopatin’s original Oneohtrix Point Never moniker – a misheard play on the Boston soft-rock radio station Magic 106.7. Musically, the album takes in all elements of OPN’s output of the last 13 years, from the deconstructed new age plunderphonics of Replica and R Plus Seven, to the alt rock and chamber pop songwriting of Garden Of Delete and Age Of and the symphonic, cinematic nature of the scores for Uncut Gems, Good Time and his production work for other artists; making self-titling the record both a reference to his roots while entrenched in the present. Lopatin has long been engaged with radio as a mode of aleatory listening.

Mr. Bungle – The Raging Wrath Of The Easter Bunny Demo CD/2xLP (Ipecac)
The first release from Mr. Bungle since 1999, The Raging Wrath Of The Easter Bunny Demo is a re-recording of the band’s 1986 high school thrash metal demo along with songs written then, but never recorded. The record also features covers of classics by S.O.D. and Corrosion Of Conformity. This version of Mr. Bungle is original members Mike Patton, Trey Spruance and Trevor Dunn, joined by Scott Ian of Anthrax and Dave Lombardo of Slayer/Dead Cross. [Limited red colored vinyl].

Mastodon – Medium Rarities 2xLP (WB)
Recently released on CD – now available on limited pink colored vinyl. Medium Rarities is the first rarities collection from Mastodon covering their entire career. The compilation features one brand new song – “Fallen Torches”. It also includes a bevy of classic covers, soundtrack contributions, instrumentals, B-sides, and live recordings on one complete package for the very first time. Among an eclectic array of covers, the musicians tackle “A Commotion” by Feist, “A Spoonful Weighs A Ton” by The Flaming Lips, “Atlanta” by Butthole Surfers, and “Orion” by Metallica. It also features soundtrack cuts such as “White Walker” (from the Game Of Thrones inspired mix tape) and the soundtrack song “Cut You Up With A Linoleum Knife” (Aqua Teen Hunger Force). Meanwhile, they get under the hood with instrumental versions of “Asleep In The Deep”, “Toe To Toes”, “Jaguar God”, and “Halloween”. [Standard black vinyl repress due December 18.]

Devo – Q. Are We Not Men? A: We Are Devo! (Rhino) LP
Rocktober Reissue. Limited Edition White Vinyl.
Devo’s 1978 debut album that features “Uncontrollable Urge” and their cover of Rolling Stones’ “(I Can’t Get No) Satisfaction”.

Elvis Costello – Hey Clockface CD (Concord)
Recorded in Helsinki, Paris and New York, Hey Clockface is the latest Elvis Costello and Sebastian Krys production, following their collaboration on Elvis Costello and The Imposters’ Grammy-winning album Look Now. Hey Clockface also features contributions from Bill Frisell, Nels Cline and Steve Nieve. “I wanted the record to be vivid, whether the songs demanded playing that was loud and jagged or intimate and beautiful,” Costello said of the project’s emotional and dynamic range.” [Vinyl edition due November 13.]

Tobacco – Hot Wet & Sassy CD/LP (Ghostly Int’l)
It’s been four years since Sweatbox Dynasty, the fourth solo LP from Pennsylvanian experimentalist Tobacco. In that time, Tom Fec’s project has toured with Nine Inch Nails, provided the theme song to HBO series Silicon Valley, and teamed with Aesop Rock for a collaborative album as Malibu Ken. He now returns with a full-length album oozing with his most playful and approachable songs to date, which, conversely, express notions of antilove, self- hate, and disappointment in others. [Limited black with clear striped colored vinyl pressing also available.]

Okkervil River – A Dream In The Dark: Two Decades Of Okkervil River Live 4xLP (ATO)
This set distills the very best of the subscription-only digital album series A Dream In The Dark into an epic chronological live compilation that doubles as an Okkervil River songbook, presenting the greatest hits of Will Sheff’s celebrated band in live, alternate, expanded and re-imagined versions, as captured in sweaty dive bars, lavish concert halls, and festival stages across the world. Packaged in a gorgeous quadruple-sleeved hardback sleeve.

Nothing – The Great Dismal CD/LP (Relapse)
The Great Dismal, Nothing’s new full-length album explores existentialist themes of isolation, extinction, and human behavior in the face of 2020’s vast wasteland. Closing in on the band’s ten-year mark, frontman Domenic Palermo finds himself stringing together songs of misanthropic tales of Philadelphia with a refined and refreshed take on Nothing’s classic sound. “The Great Dismal refers to a swamp, a brilliant natural trap where survival is custom fit to its inhabitants,” Palermo states. “The nature of its beautiful, but taxing environment and harsh conditions can’t ever really be shaken or forgotten too easily.” The ever progressive Nothing keep true to their chaotic outlook on life, keeping a keen eye to avoid repetition. With a radical cast of talented contributors such as harpist Mary Lattimore, classical musician Shelley Weiss, and singer/songwriter/producer Alex G., The Great Dismal showcases yet another essential side of the band’s trademark American post-shoegaze style. [Limited blue colored vinyl pressing also available.]

Sam Smith – Love Goes CD/LP (Capitol)
Grammy and Academy Award-winning singer/songwriter Sam Smith follows up his multi-Platinum debut and sophomore albums, In The Lonely Hour and The Thrill Of It All with his third studio effort, Love Goes. Its 17 songs were written over the course of the past two years. The pandemic gave Smith a fresh perspective on the album and impacted both its title and the recording of tracks such as “My Oasis”, a cross-continental collaboration with Burna Boy, and the dazzling dancefloor anthem “Diamonds”. Love Goes also features collaborations with Normani on the chart-topping “Dancing with a Stranger,” Labrinth (“Love Goes”) and Calvin Harris (“Promises”).

Suuns – FICTION EP 12” (Joyful Noise)
Suuns are future-oriented. New sounds, new techniques, new ways of thinking; above all, new environments are the lifeblood of the band. Whether in a sweltering studio in Dallas with John Congelton, self-recording in Montreal’s storied Breakglass Studio, or playing acoustic instruments at Hotel 2 Tango, the group’s environment has always had an indelible impact on the sound of whatever future Suuns are imagining at the time. And true to form, here on FICTION EP, Suuns are exploring fresh processes as a result of their current surroundings and global circumstances.

Nils Frahm – Empty CD/LP (Erased Tapes)
Conceived of just before Nils broke his thumb and composed the similarly intimate solo piano album Screws, Empty is a soothing vessel of eight simple and serene pieces originally recorded as the music to a short art film he shot with his friend and film director Benoît Toulemonde.

Mourn – Self Worth CD/LP (Captured Tracks)
Mourn’s “root sound is like a louder, more manic form of the mid-90s femme-led indie outgrowth, ala the Simple Machines’ roster, Throwing Muses and early Sleater-Kinney.” – Rock And Roll Globe

Suzzy Roche & Lucy Wainwright Roche – I Can Still Hear You CD (Storysound)
Suzzy Roche and her daughter Lucy Wainwright Roche shed some light on our troubled times on their third collaboration, I Can Still Hear You. The recording began in Nashville; then Suzzy and Lucy completed the project from their quarantine homes in NYC. The 11-track album showcases 8 soul-searching, thought-provoking originals and three covers, and features guest appearances by Amy Ray and Emily Saliers of the Indigo Girls.

U2 – All That You Can’t Leave Behind [Reissue/2000] CD/2xCD/2xLP (Interscope)
In celebration of All That You Can’t Leave Behind’s 20th anniversary, the album has been newly remastered and reissued in a variety of editions: Single-disc CD; expanded double-CD featuring a bonus live CD; A 180gm double-LP set complete with the bonus track “The Ground Beneath Her Feet” and a 20 page 12″ x 12″ booklet; and a Super Deluxe five-disc edition featuring a CD of B-sides, outtakes and alternate versions, two CDs featuring Elevation Live From Boston – the full 19 track set – and a CD of 11 remix singles, including four previously unreleased, plus a 32-page hardback book by long-time U2 collaborator Anton Corbijn and a double-sided poster.