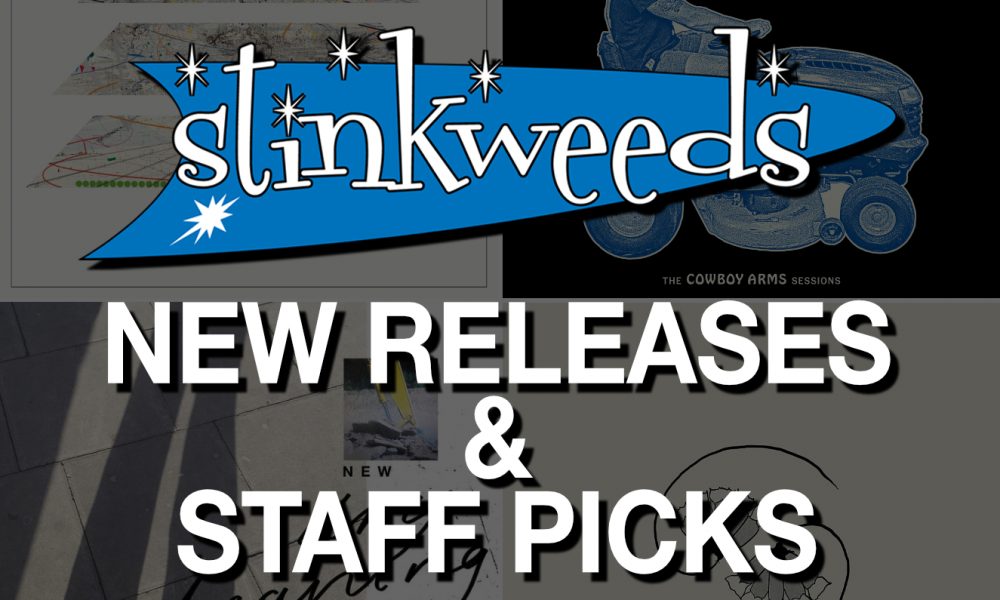 Godspeed You! Black Emperor – G_d’s Pee AT STATE’S END! LP+10” (Constellation)
The inimitable GYBE returns with another soundtrack for our times. As the heretical anarcho-punk spirit of the title implies, Godspeed harnesses some particularly raw power, spittle and grit across two riveting 20-minute side-length trajectories of noise-drenched widescreen post-rock: inexorable chug blossoms into blown-out twang, as some of the band’s most soaring, searing melodies ricochet and converge amidst violin and bassline counterpoint. Field recordings and roiling semi-improvised passages frame these fervent epics, and two shorter self-contained 6-minute pieces find the band at its most devastatingly beautiful, haunting and elegiac.

Floating Points, Pharoah Sanders & The London Symphony Orchestra – Promises CD/LP (Luaka Bop)
British musician/producer Floating Points (aka Sam Shepherd), legendary jazz saxophonist Pharoah Sanders and the London Symphony Orchestra join supreme forces for Promises, an album of nine movements for the ears, heart and soul. The first album Sanders has recorded in over a decade, the simply stunning 46-minute collection floats and melts and is as beautiful as it is mesmerizing. CD/LP now, 180gram LP in a few weeks!

Sturgill Simpson – Cuttin’ Grass Vol. 2: The Cowboy Arms Sessions CD/LP (High Top Mountain)
Sturgill Simpson returns with the next installment of his bluegrass series, Cuttin’ Grass Vol. 2: The Cowboy Arms Sessions. The genre-defying singer/songwriter reconvened an A-Team of acoustic players (now dubbed “The Hillbilly Avengers”) for another round of reinterpretations of his catalogue, this time largely focusing on 2016’s A Sailor’s Guide To Earth, which won the Grammy for Country Album of the Year and was nominated for Album of the Year. This volume also includes “Jesus Boogie”, originally performed by Simpson’s first band, Sunday Valley, and two previously unreleased songs, “Tennessee” and “Hobo Cartoon”, the latter of which was co-written with the incomparable Merle Haggard – who once said that Simpson was “about the only thing I’ve heard that was worth listening to in a long time.” [A limited indie store exclusive vinyl pressing is also available.]

Flock Of Dimes – Head Of Roses CD (Sub Pop)
On her second full-length record, Head Of Roses, Jenn Wasner follows a winding thread of intuition into the unknown and into healing, led by gut feelings and the near-spiritual experience of visceral songwriting. The result is a combination of Wasner’s ability to embrace new levels of vulnerability, honesty and openness, with the self-assuredness that comes with a decade-plus career as a songwriter, producer, multi-instrumentalist and prolific collaborator. Showcasing the depth of Wasner’s songwriting capabilities and the complexity of her vision, Head Of Roses calls upon her singular ability to create a fully-formed sonic universe via genre-bending amalgamation of songs and her poetic and gut punch lyrics. It’s the soundtrack of Wasner letting go – of control, of heartbreak, and of hiding who she is. [Vinyl edition due April 30.]

The Fratellis – Half Drunk Under A Full Moon CD/LP (Cooking Vinyl)
“If you thought you knew The Fratellis, think again. Half Drunk Under A Full Moon, the Glasgow band’s sixth album, is a kaleidoscopic delight full of surprises, from its flamboyant title track and lush songs steeped in brass and strings to twists on the stomping sing-alongs with which the trio first found fame.

Shakey Graves – Roll The Bones X 2xCD/2xLP (Dualtone Music Group)
In honor of the tenth anniversary of Roll The Bones, Shakey Graves presents Roll The Bones X. This reissue includes the original album paired with 15 Odds + Ends, a full second disc of never before heard songs, demos, and deep cuts. Shakey Graves brainchild Rose-Garcia released Roll The Bones on Bandcamp in 2011 without any promotion and little to no information about Shakey Graves. That year, Bandcamp made it a featured album for a month and from there it has stayed among the website’s top selling records. [A limited-edition gold and black color vinyl pressing is also available.]

Luca Yupanqui – Sounds Of The Unborn CD/LP (Sacred Bones)
Luca Yupanqui was not yet born when she recorded her debut album. The music on the aptly titled Sounds Of The Unborn is the expression of life in its cosmic state – pre-mind, pre-speculation, pre-influence, and pre-human. It is the first album created by a person while they were still inside the womb, the expression of a soul that hasn’t yet seen the light of day nor taken a single breath of air. It is a message that comes from a different realm, a sublayer of our existence. Sounds Of The Unborn was made with biosonic MIDI technology, which translated Luca’s in utero movements into sound. With the help of her parents, Psychic Ills bassist Elizabeth Hart and Lee Scratch Perry collaborator Iván Diaz Mathé, Luca’s prenatal essence was captured in audio.

The Bangles ‎– Doll Revolution [Reissue/2003] 2xLP (Real Gone Music)
The Bangles ‎– Sweetheart Of The Sun [Reissue/2011] LP (Real Gone Music)
Limited white (Doll Revolution) and teal (Sweetheart Of The Sun) color vinyl reissues of the last two records by the pop rock band who peaked in popularity in the mid-late ‘80s with the hits “Walk Like An Egyptian”, “Manic Monday”, “In Your Room” and “Eternal Flame”. The band officially broke-up in 1989 but almost ten years later, in 1998, started drifting back together. In 1999, they officially re-formed to record a song for the soundtrack of Austin Powers: The Spy Who Shagged Me. The reunion continued with a tour in 2000 and in 2003 they released, Doll Revolution, their first album since 1988’s Everything.

The Natvral – Tethers LP (Kanine)
As the frontman of The Pains of Being Pure at Heart, Kip Berman wrote songs about the thrills and ills of young adult life with the care and concern of a cool older sibling. The long-standing New York City indie pop group disbanded soon after releasing their final record in 2017, and Berman found himself at a creative crossroads. He wanted to keep making music, but the themes and sounds he was interested in had shifted; it felt time for a course correction. Berman discovered an unvarnished, broken folk rock sound– a marked departure from his previous work. Recorded over 7 days with producer Andy Savours (My Bloody Valentine, Black Country New Road, The Pains of Being Pure at Heart), Tethers is as raw in sound as it is nuanced and empathetic in its lyricism. Without effect pedals, overdubs or even a metronome, the resulting album feels free and unpretentious, recalling the strident obliqueness of Bob Dylan and Neil Young’s sonic primitivism – but drawn from a set of vividly detailed experiences all Berman’s own.

Various Artists – Nativity In Black LP (Real Gone)
Double vinyl LP pressing in gatefold jacket. Hard to believe in this day and age, but this killer 1994 Black Sabbath tribute 2-LP set was not originally released on vinyl in the U.S.! The record went gold, and features the one and only performance (“The Wizard”) by the Bullring Brummies, which takes the term “metal supergroup” to a whole new level: Rob Halford from Judas Priest, Scott “Wino” Weinrich from The Obsessed and Vitus; Fight guitarist Brian Tilse, and Geezer Butler and Bill Ward from Black Sabbath themselves (not to be undone, Ozzy sings with Therapy? on “Iron Man”)! Megadeth got a Grammy nom for it’s cover of “Paranoid” too, and that’s Ministry’s Al Jourgenson guesting with 1000 Homo DJ’s and Bruce Dickinson guesting with Godspeed.

Tony Molina – Confront The Truth LP (Slumberland)
When Tony Molina released Confront The Truth in 2016 it had been three long years since his previous record (the now-classic album “Dissed And Dismissed”) and anticipation was intense. Tony’s crunchy Teenage Fanclub-meets-Replacements power-pop was informed sonically and spiritually by his beloved SF South Bay area DIY punk scene, but Confront The Truth confounded the desire for more of the same by spotlighting Tony’s formidable songwriting with spare, mostly acoustic arrangements that hearken back to the circa 1967 psychedelic folk-pop of early Bee Gees, The Move, The Beatles and Tomorrow. Out-of-print for several years, we’re happy to bring this record back on vinyl now, and this time as a 12″ rather than 7″ to give these beautiful, delicate songs more room to breathe. Truly the kind of aural tonic we all need right now.

dvr – Tape_01 + Thru the City LP (XL)
dvr is Dillon van Rensburg, a seventeen year old songwriter and producer from North Berwick, Scotland. With his self-released music (the tape_01 EP and “thru the city” single) racking up streams in the millions over the last twelve months, dvr counts Kenny Beats (who discovered dvr via fan enthusiasm on his Discord channel), Snoop Dog and Joy Orbison among his growing fanbase). With influences ranging from Tyler, The Creator, Frank Ocean and Kaytranada to Jimmy Hendrix and the Foo Fighters, it’s the unfiltered sound of an exceptional new talent beginning his ascent.

Owen Pallett – Island CD/LP (Domino)
Almost entirely acoustic, Island begins with 13 darkened chords, and was recorded live at Abbey Road Studios with the London Contemporary Orchestra. The introduction is a sound of waking up—alone, and on the shore of a strange land. What follows is a shimmering and luscious orchestral album that draws across the full breadth of Oscar-nominated composer and songwriter Owen Pallett’s discography, from Heartland’s Technicolor to the glittering, fingerpicked guitar that marked Pallett’s first records with their trio, Les Mouches.

Bell Orchestre – House Music CD/LP (Erased Tapes)
Erased Tapes announce Bell Orchestre’s House Music,  an immersive ecosystem of an album to be released on March 19, and the first full-length work released by the acclaimed Montreal-based outfit in over a decade. House Music unfolds as one long piece, a recorded-then-sculpted improvisation that vastly expands their work, coalescing classical and electronic instrumentation in the creation of genre-defying musical worlds.