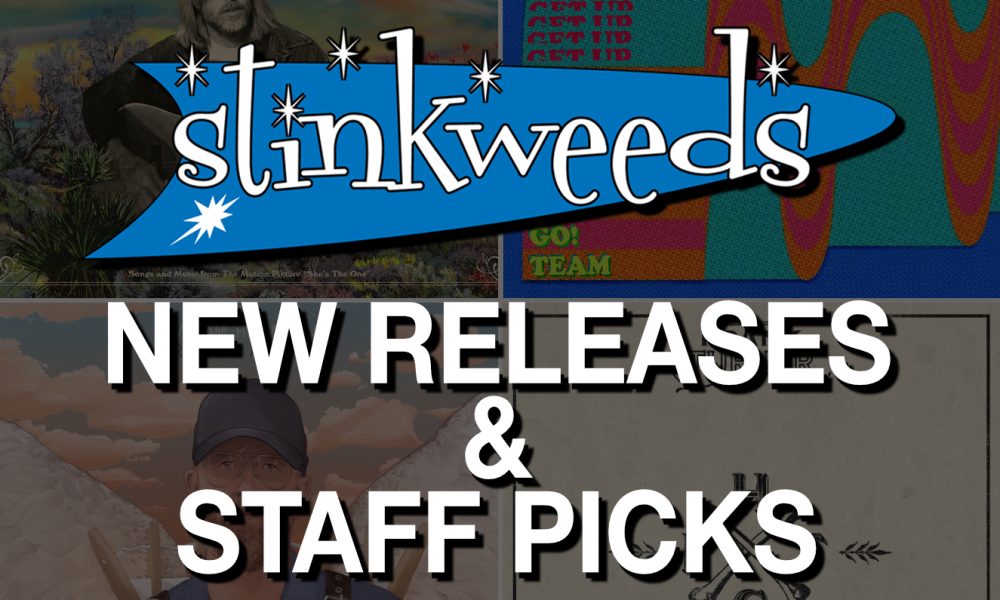 Tom Petty and The Heartbreakers – Angel Dream: Songs and Music From The Motion Picture She’s The One CD/LP (WB)
To celebrate the 25th anniversary of the release of She’s The One, Warner Bros. presents a remixed, remastered and re-imagined version of the album. The original album included several songs that were left off the original Wildflowers album (recently included as the All The Rest disc in the Wildflowers & All The Rest reissue), so this re-release is an appropriate ending to the campaign celebrating the Wildflowers-era. Ryan Ulyate (Tom’s longtime engineer and producer) has remixed the audio, and the song selection is designed to work as a Tom Petty and The Heartbreakers album, rather than a soundtrack album. Four unreleased tracks have been added: the rocker “105 Degrees” (written by Petty), a cover of JJ Cale’s “Thirteen Days”, “One Of Life’s Little Mysteries” (another Petty original), and an instrumental (“French Disconnection”) in the same vein as the instrumentals on the original album. An extended version of “Supernatural Radio” is also included.

The Go! Team – Get Up Sequences Part One CD/LP+MP3 (Memphis Industries)
The Go! Team has created a musical world distinctly of their own making here. A place where routine is outlawed, and perfection is the enemy. Where Ennio Morricone meets the Monkees armed with flutes, glockenspiels, steel drums and a badass analogue attitude. We’re talking widescreen, four-track, channel hopping sounds that are instantly recognizable.

Bobby Gillespie & Jehnny Beth – Utopian Ashes CD (Third Man)
“During the course of a 35-year career, ‘sensitive’ and ‘mature’ are not adjectives that have often been wheeled out to describe Bobby Gillespie’s lyrics. Indeed, the Primal Scream lead singer’s canon of work has generally favored MC5-lite rebel posturing over insight and depth. All of which makes this collaboration with former Savages frontwoman Jehnny Beth such a welcome surprise. The pair have written a set of songs located within the wreckage of a marriage that is falling apart, with both parties torn between looking back with remorse and nostalgia on what’s been lost and moving on and making a new start alone. Recorded with Gillespie’s Scream bandmates, as well as Beth’s regular foil Johnny Hostile, as much care has gone into the arrangements as the lyrics.” – The Guardian [Vinyl edition due September 24.]

Kool Keith – Keith’s Salon CD/LP (Logistic)
Written with a libidinal urgency that has come to characterize Kool Keith’s legendary lyricism, Keith’s Salon explores our current obsessions with luxury, beauty, and notoriety. But rather than fetishize the beautiful dum-dums who walk red carpets in black Prada gowns, Kool Keith’s most recent studio album shifts our attention to the work and workers that underpin our fantasies of American excess and the good life. As such, the album is also a timely meditation, during quarantine, on the economic precarity many of us now find ourselves in.

William Fitzsimmons – Ready The Astronaut LP (Nettwerk)
Limited color vinyl pressing. The appeal of William Fitzsimmons’ sound is indicative of his unique upbringing and consequent life experience. Over the course of his career, Fitzsimmons has made his living writing a specific brand of honest and inward-looking folk songs that fearlessly and candidly examine the evolving self while dexterously communicating his talent for robust melodies and catchy instrumentation.

Frankie and The Witch Fingers – Heavy Roller [Reissue/2016] LP (Greenway)
Limited clear vinyl pressing. Bubbling up from the psychedelic tar pits of L.A., Frankie and The Witch Fingers have been a constant source of primordial groove for the better part of the last decade. Formed and incubated in Bloomington, IN before moving west to scrap with Los Angeles’ garage rock rabble, the band evolved from cavern-clawed echo merchants to architects of prog-infected psych epics that evoke a shift in reality.

At The Gates – The Nightmare Of Being CD/LP (Century Media)
The undisputed masters of Swedish death metal deliver what can only be described as the finest album of their career to date. A concept album that explores the dark revelations contained in pessimist philosophy, The Nightmare Of Being unveils a newly liberated and adventurous At The Gates, via some of the bravest and most mesmerizing material they have ever written. Quite unlike anything the band has previously released, The Nightmare Of Being plumbs existential depths and conjures some profound questions for anyone bold enough to engage.

Marina Allen – Candlepower LP (Fire)
Marina Allen glides on angelic highs, surfing the husky deep; she is one of the great new voices of her generation. Writing songs that carry notes from other realms; these are kitchen table tales about love and fear, the capturing of the wild heart, sketching the breaking of dawn, bringing real life back to life. Every song on this debut album Candlepower is a tick box of influences, asides, inspirations, quickfire theories, storylines and melodic progressions that galvanise a chemical reaction for each dramatic scene that unfolds.

Frank Turner – England Keep My Bones Reissue LP (Xtra Mile)
This is the tenth anniversary edition of Frank Turner’s fourth album England Keep My Bones. This is the album that saw Frank step up from underground, cult status to mainstream success. It features the hit singles ‘Peggy Sang The Blues’, ‘If Ever I Stray’ and ‘I Still Believe’ and ‘Wessex Boy’ both of which Frank performed at the Olympic Opening Ceremony in 2012. At the end of the album campaign in April 2012 Frank headlined a sold out Wembley Arena. This tenth anniversary edition includes beautiful new artwork. Available on limited edition opaque yellow vinyl.
Horrorpops – Live At The Wiltern 2LP (Cleopatra)

Double 180g  vinyl LP pressing. The first-ever live album from psychobilly superstars, HorrorPops, brings all the magic of their stage show to your home. Live At The Wiltern was recorded live in 2020 just before the start of the global shutdown and finds the band in top form kicking out such fan favorites as “Walk Like A Zombie,” “Miss Take,” “Freaks In Uniform,” “Where They Wander” and more! Available on limited edition gold vinyl.