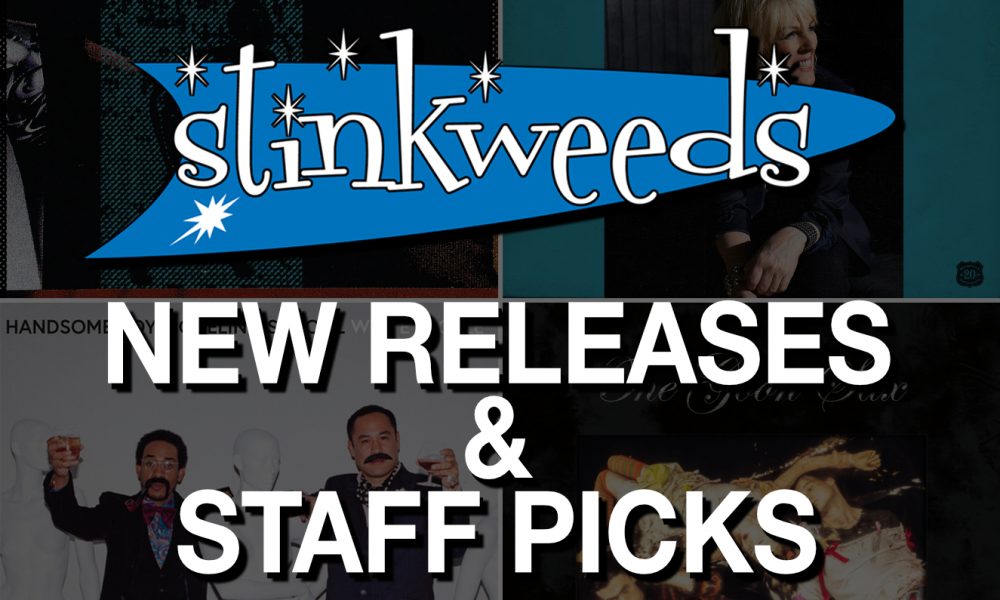 Clipping. – Wriggle (Expanded) CD/LP+MP3 (Sub Pop)
The original, digital-only Wriggle was six tracks that weren’t finished in time to make it onto the group’s 2014 Sub Pop debut, CLPPNG. The EP’s title track, “Wriggle”, was built around a sample of the influential power-electronics song “Wriggle Like A Fucking Eel” by Whitehouse, transforming William Bennett’s torturous imperative into a instructional dance-floor banger. The 2021 edition features new artwork, guests, and previously unreleased remixes. Included are the original versions of the title track, “Shooter”, “Hot F**k No Love” (feat. Cakes Da Killa & Maxi Wild), “Our Time” (feat. Nailah Middleton), along with “Back Up 2021” feat. SB The Moor and a new verse from industrial-rap experimentalist Debby Friday. Wriggle also features remixes of the title track from drum ‘n’ bass/breakbeat act Homemade Weapons and Classicworks label co-founder Cardopusher, a rework of “Back Up” by Fade To Mind producer Dave Quam (formerly Massacooramaan), and Chicago footwork producer Jana Rush delivers both the “Hot F**k No Love (Naughty Bitch Remix)” for the vinyl version, and “Shooter (Face Rearranged Remix)” for the digital release.

Handsome Boy Modeling School – White People (Tommy Boy) LP
Limited edition re-issue on opaque white vinyl. Formed in 1999 by acclaimed hip-hop producers Dan the Automator (Gorillaz, Dr. Octagon, Deltron 3030) and Prince Paul (Stetsasonic, de la Soul, Gravediggaz,) Handsome Boy Modeling School is a concept project that instantly turned heads and brought a whole new dynamic to the world of hip-hop. Hidden behind the world-class and all-star lineup, the group created a project that parodied vain, consumerist, materialistic and self-absorbed members of upper-class society. While the 1999 release of their debut project, “So… How’s Your Girl?,” helped to set the tone and introduce the world to Handsome Boy Modeling School, it was their 2004 follow-up, White People, which helped to solidify the project as a game-changer amongst hip-hop heads.

Lucinda Williams – Lu’s Jukebox Vol. 2: Southern Soul From Memphis To Muscle Shoals CD/LP (Highway 20)
Revered singer/songwriter Lucinda Williams is working to help independent music venues during this time with the announcement of Lu’s Jukebox. Scheduled as a six-episode series of mostly full-band, HD video performances in-studio, Lu’s Jukebox features a themed set of songs by other artists curated by the multi-Grammy award winner. Largely full-band performances recorded live at Ray Kennedy’s Room & Board Studio in Nashville, TN, Lucinda has poured her heart and soul into each of these episodes. From hand-selecting the songs to giving it her all in the studio, this series has been a journey you won’t want to miss. Lu’s Jukebox Vol. 2 Southern Soul finds Lucinda dishing out numbers from Memphis to Muscle Shoals and beyond and tackling the likes of Joe South’s “Games People Play”, Bobbie Gentry’s “Ode To Billy Joe”, Ann Peebles’ “I Can’t Stand The Rain”, Tony Joe White’s “Rainy Night In Georgia” and Al Green’s “Take Me To The River” among others.

The Goon Sax – Mirror II CD/LP+MP3 (Matador)
Since forming in high school, Brisbane band The Goon Sax has been celebrated for their unpretentious, kinetic homemade pop. Mirror ll is something else entirely: a new beginning, a multi-dimensional eclectic journey of musical craftsmanship that moves from disco to folk to no wave skronk with staggering cohesion.

Jon Hopkins – Piano Versions CDEP (Domino)
Presented as the sister record to 2014’s Asleep Versions, Piano Versions is a collection of ambient piano cover versions. The songs on the EP, originally by Roger & Brian Eno, Thom Yorke, Luke Abbott and James Yorkston, are presented in a completely new context to their initial form. On these versions, Hopkins used his upright piano as the centerpiece of the EP, whilst recording the ambient, environmental elements around it.

Koreless – Agor CD/LP (Young Turks)
Producer Lewis Roberts aka Koreless announces his much-anticipated debut album. Agor is the Welsh word for open and it’s an apt name for a recording which exists at sensory thresholds, straddling the various worlds of dance, ambient and contemporary classical while not sounding like an example of any of them.

The Wallflowers – Exit Wounds CD/LP (New West)
Rock ‘n’ roll is often hard to define, or even to find, in these fractured musical times. But to paraphrase an old saying, you know it when you hear it. And you always hear it with The Wallflowers. For the past 30 years, the Jakob Dylan-led act has stood as one of rock’s most dynamic and purposeful bands – a unit dedicated to and continually honing a sound that meshes timeless songwriting and storytelling with a hard-hitting and decidedly modern musical attack. That signature style has been present through the decades, baked into the grooves of smash hits like 1996’s Bringing Down The Horse as well as more recent and exploratory fare like 2012’s Glad All Over. But while it’s been nine long years since we’ve heard from the group with whom he first made his mark, the Wallflowers are silent no more.

Bohren & Der Club Of Gore – Geisterfaust 2xLP (PIAS America)
Vinyl reissue of the excellent 2005 album from the German doom jazz cult band. The group, who is much beloved by musicians like Mike Patton (of Faith No More who releases their albums on the Ipecac label) and Stephen O’Malley, deliver outstanding instrumental music of the highest caliber here for fans of Sunn O))), OM, Max Richter, Fennesz and David Lynch/Angelo Badalamenti.

Available on limited edition Silver vinyl. To celebrate the 30th Anniversary of BMX Bandits seminal sophomore LP, Star Wars, Last Night From Glasgow will release the remastered album on vinyl. Featuring the classic Bandits line up: Stuart, McAlinden, Blake, Kelly, Keen and MacDonald the album is jam packed full of chiming guitars and catchy choruses, not to mention the odd spectacular ballad. BMX Bandits have long been the unsung heroes at the centre of the Glasgow music scene. As mentioned, the record features a veritable “who’s who” of ScottiBad Scene, is an LP of guitar improvisations and songs by the multigenerational improvisational protest-duo Eugene Chadbourne and Jim McHugh. Made mostly in Eugene’s living room in Greensboro, NC on Jan 21st and 23rd, 2020 during a family visit between Sunwatchers tours by the NC native McHugh, Bad Scene was recorded live in single takes to Jim’s portable multitrack rig.sh musicians – Norman Blake (Teenage Fanclub), Eugene Kelly (The Vaselines), Joe McAlinden (Superstar) and Francis McDonald (Teenage Fanclub) all contribute on this indie classic.

At Pioneer Works is the long-awaited new album by Tuareg avant-rock group Les Filles de Illighadad. Recorded in Brooklyn at the tail end of a two-year-long world tour, At Pioneer Works finds Les Filles at the height of their powers, creating a sound that transcends all known genres. This is a heavy and meditative set of live music from one of the world’s most exciting bands.

Bad Scene is an LP of guitar improvisations and songs by the multigenerational improvisational protest-duo Eugene Chadbourne and Jim McHugh. Made mostly in Eugene’s living room in Greensboro, NC on Jan 21st and 23rd, 2020 during a family visit between Sunwatchers tours by the NC native McHugh, Bad Scene was recorded live in single takes to Jim’s portable multitrack rig.