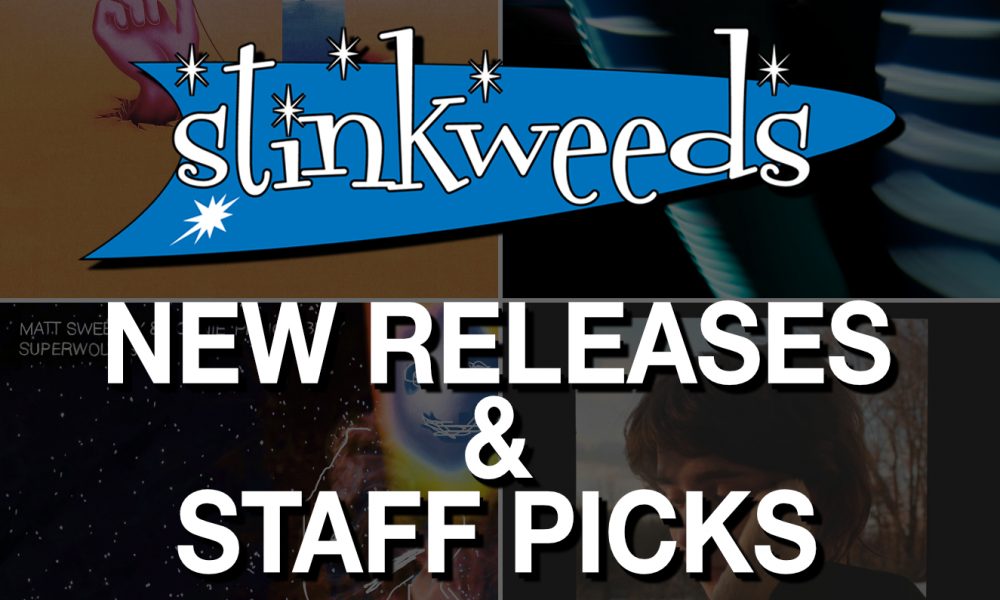 Black Pumas – Capitol Cuts: Live From Studio A CD/LP (ATO)
Recorded direct to acetate – all live, no overdubs – Capitol Cuts: Live From Studio A captures a powerful moment in time. After months of cancelled shows Black Pumas went to Los Angeles in Fall 2020 and laid down eight explosive tracks at the famed Capitol Studio A. The recording brims with pent up energy, nearly bursting through the grooves on the expansive and mind-blowing seven-minute rendition of “Colors”. A few weeks later the song would receive a Grammy nomination for Record of the Year. [A limited-edition color vinyl pressing is also available.]

Wavves – Hideaway CD/LP (Fat Possum)
Featuring Nathan Williams’ most universal and urgent songs yet, Wavves new album Hideaway marks their return to Fat Possum Records. Across its brief but impactful nine tracks, the album, produced by Dave Sitek of TV On The Radio, is about what happens when you get old enough to take stock of the world around you and realize that no one is going to save you but yourself, and even that might be a tall order. “It’s real peaks and valleys with me,” Williams says. “I can be super optimistic, and I can feel really good, and then I can hit a skid and it’s like an earthquake hits my life, and everything just falls apart. Some of it is my own doing, of course.” It’s this self-awareness that permeates each of Hideaway’s songs, marking them each as mature reckonings with who he is. [A limited-edition indie store exclusive vinyl edition is available.]

Alice Coltrane – Kirtan: Turiya Sings CD/2xLP (Impulse!)
Archive release. Alice Coltrane is the undeniable godmother of spiritual jazz and an acknowledged influence on everyone from Flying Lotus and Kamasi Washington to Solange and Radiohead. Kirtan: Turiya Sings features Alice Coltrane at peak spirituality and is presented in this arrangement for the first time. Turyia Sings was originally released in 1982 on cassette as a collection of devotional songs including vocals, organ, strings, and synthesizers available only at Alice’s Sai Anantam Ashram.

Cory Hanson – Pale Horse Rider CD/LP (Drag City)
Lingering at the remains of a campfire before dawn, with the politics of the personal burnt into ash, running his stick through what’s left, Wand singer/guitarist Cory Hanson is reflecting on a series of moments in which he steps farther into himself, finding the ultimate big sky country on the inside of his skull. It’s a combination of songs and sounds that journey through bleak and broken territory and places of sweet, lush remove, and it adds up to the best record he’s been involved in yet: his second solo album, Pale Horse Rider.

Matt Sweeney & Bonnie Prince Billy – Superwolves CD/LP (Drag City)
They look like we do and may live somewhat the same. Yet, they are multiplied. Where once was Superwolf, now are Superwolves. What world, REALLY are Matt Sweeney and Bonnie ‘Prince’ Billy from? A place of all-music, knowing no borders, no morals other than natural tribal lines to be violated in the name of love and light, for all together.

Tedeschi Trucks Band featuring Trey Anastasio – Layla Revisited (Live At Lockn’) 2xCD/3xLP (Fantasy)
Layla Revisited (Live At Lockn’) captures Tedeschi Trucks Band at their incendiary best, together with Phish’s renowned guitarist/vocalist Trey Anastasio. Recorded on August 24, 2019, the performance of Derek and the Dominos’ hallowed 1970 album Layla And Other Assorted Love Songs in its entirety was kept secret until the moment the band took stage. [Vinyl edition features an etching on Side F.]

Bacao Rhythm & Steel Band – Expansions LP (Big Crown)
Bacao Rhythm & Steel Band, the mysterious steel pan outfit hailing from Hamburg, Germany has amassed a cult following around the globe. With a slew of classic 7”s and two critically acclaimed full-length albums, they set a high bar for themselves, one they clearly intend on pushing even higher with this new offering.

Beastie Boys ‎– Some Old Bullshit [Reissue/1994] LP (Capitol)
Some Old Bullshit compiles several of Beastie Boys’ early EPs, recorded in the early 1980s. These recordings present a sound radically different from that of the hip-hop sound generally associated with the band. Instead, these songs represent the band’s part in the early New York hardcore scene.

Cochemea – Vol. 2: Baca Sewa LP (Daptone)
The Dap-Kings’ electro-sax space warrior returns with a groove-heavy sequel to All My Relations, an expressive, transcendental voyage through the archive of his indigenous roots and beyond. [CD edition due August 6.]

Ani Di Franco – Revolutionary Love LP (Righteous Babe)
Limited color vinyl pressing. The transcendent new album from Ani Di Franco, Revolutionary Love marks the latest proof of one of her most powerful gifts as an artist: a rare ability to give voice to our deepest frustrations and tensions, on both a personal and political level.

Jon Hopkins – Piano Versions 12”+MP3 (Domino)
Presented as the sister record to 2014’s Asleep Versions, Piano Versions is a collection of ambient piano cover versions. The songs on the EP, originally by Roger & Brian Eno, Thom Yorke, Luke Abbott and James Yorkston, are presented in a completely new context to their initial form. On these versions, Hopkins used his upright piano as the centerpiece of the EP, whilst recording the ambient, environmental elements around it.

Vinyl LP pressing. Originally released in 2009, Insides is Jon’s third solo album. It paved the way for both Immunity (his hypnotic breakthrough solo album) and Diamond Mine (his collaboration with King Creosote) which attracted Mercury nominations and for his recently released fifth solo artist album, Singularity.

Aaron Frazer – Over You 7″ (Colemine)

A burner of a 45 from Aaron Frazer, both tracks taken from his debut album Introducing… produced by Dan Auerbach. On limited edition gold vinyl.

Sob Rock is the new album from John Mayer, and this collection marks the artist’s eight full length studio album. Sob Rock is produced by John Mayer and Don Was, and was recorded entirely during the global pandemic of 2020- 2021. The album was launched with the single and video, “Last Train Home.”