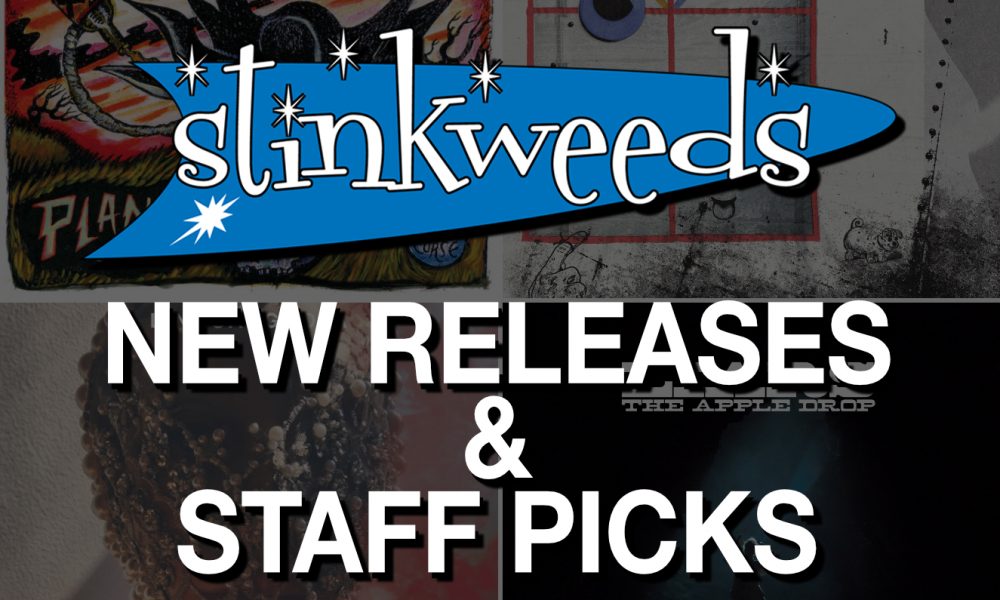 Liars – The Apple Drop CD/LP (Mute)
The Apple Drop follows 2017’s TFCF and 2018’s Titles With The Word Fountain, both distinctly solo affairs, but for Liars’ tenth album, Angus Andrew chose to expand and embrace collaboration. “My goal was to create beyond my abilities – something bigger than myself,” he notes. The new album finds him working with avant-garde jazz drummer Laurence Pike, multi-instrumentalist Cameron Deyell and lyricist Mary Pearson Andrew. “For the first time, I embraced collaboration from an early stage, allowing the work of others to influence the work of my own,” Angus adds. This mixing of raw, organic live instrumentation in the studio, along with Angus’s solo tinkering at the computer, results in an album that blurs boundaries between the archetypal band structure and experimental electronics. [A limited-edition color vinyl pressing is available.]

Lingua Ignota – Sinner Get Ready CD/2xLP+MP3 (Sargent House)
New release from Kristen Hayter, the classically trained multi-instrumentalist, performance artist, and vocalist known as Lingua Ignota. The follow up to her critically acclaimed break out Caligula, Sinner Get Ready is an abrasive, unsettling portrait of devotion and betrayal, judgment and consequence, set in the derelict landscape of rural Pennsylvania, a neglected region deeply embedded with a particular god-fearing brand of Christianity, and where Hayter currently lives.

Hippo Campus – Good Dog, Bad Dream CDEP/12”/Cassette (Grand Jury)
Good Dog, Bad Dream is the new EP from Hippo Campus, and the St. Paul, Minnesota five-piece’s first new music since their 2018 sophomore album Bambi. It finds the band at their most honest and vulnerable to date, with five new intensely cathartic tracks tinged with confessions and dark humor. It’s a collection of songs that came together with ease, and without pressure — a wildly different experience than the typical Hippo Campus recording process. The band – made up of vocalist/guitarists Jake Luppen and Nathan Stocker, drummer Whistler Allen, bassist Zach Sutton, and trumpeter DeCarlo Jackson — assembled Good Dog, Bad Dream with a genuine sense of freedom and enjoyment as part of their first sessions in their new Minneapolis studio space. It’s a celebration of brotherhood, and the “all for one, one for all” mentality that has permeated Hippo Campus’ work since the very beginning. [A limited-edition indie store exclusive vinyl pressing is available.]

Willy Mason – Already Dead CD/LP (Cooking Vinyl)
Magic, miracles, ghosts, world leaders; these days it seems there is little left to believe in. Lies outweigh truth and even truth can be dangerous. Raising everyone’s spirits Already Dead – the fourth album and the first for nine years from Willy Mason – explores honesty and deception, anonymity in the digital age, good intentions with unexpected consequences, freedom, colonialism, love, God, and purpose because, its storyteller says, now is the time to restore some much-needed faith. “Already Dead is a spiritual state to aspire to; it is freedom from the trappings and inhibitions of one’s ego, culture, and mythology. It is freedom and love and freedom to love in the face of death,” tells Willy of the philosophy behind the writing. “It’s about the necessary destruction of one’s mythology; mythology of species, sex, race, nation, self. It’s about the pain and tragedy that comes with such destruction, but also about the freedom, possibility and opportunity for reconciliation; reconciliation with the natural world and with each other.”

Drive-By Truckers – Plan 9 Records July 13, 2006 2xCD/3xLP (New West)
On July 13, 2006, the Drive-By Truckers set up shop at Plan 9 Records in Richmond, VA. It was the 25th Anniversary of the store. The band performed to a packed house and played a blistering set of fan-favorites featuring the songs, “18 Wheels of Love”, “Let There Be Rock”, “Goddamn Lonely Love” and “Daddy’s Cup”.

Colin Hay – I Just Don’t Know What To Do With Myself CD/LP (Compass)
Colin Hay first emerged as songwriter/vocalist for hitmakers Men At Work before establishing himself as a solo artist. But his love for music was born in his native Scotland while working at his parents’ record store and hearing the hits of the day. At home during quarantine in 2021, Hay was moved to record some of his favorites from that period. From the Kinks’ “Waterloo Sunset” to Faces’ “Ooh La La” and Dusty Springfield’s “I Just Don’t Know What To Do With Myself”, Hay delivers a set a lushly reimagined classics that showcase both his talent for interpreting songs and his iconic vocals.

Brian Jackson, Ali Shaheed Muhammad, & Adrian Younge – Jazz Is Dead 8 CD/LP (Jazz Is Dead)
JID008 is the first full album released by the great man in 20 years and it’s a testament to his multifaceted talents that while there are moments throughout that hint at his game-changing history and track record, for the most part it reveals a musician whose considerable lessons learned from the past only serve to keep his eyes firmly fixed on the future. It’s a masterclass in unbridled and open-minded creativity, no different from what Brian did half a century ago. The ease and comfort with which his ideas integrate with those of musicians a generation younger than him bears this out. To listen to this album is to hear a hot up-and-coming musician who also happens to be a major jazz-funk legend.

Nico – Drama Of Exile [Reissue/1981] CD/LP (Modern Harmonic)
As one critic memorably put it, “when Nico spoke it was like coffin-lids creaking. When she sang it was like listening to ravens taking off, 13 at a time.” 1981’s Drama Of Exile features originals along with stoic takes on Bowie and The Velvet Underground.

Animals As Leaders ‎– Weightless [Reissue/2011] LP (Prosthetic)
When unknown virtuoso guitarist Tosin Abasi released his debut solo album under the moniker Animals As Leaders in 2009, few would have predicted the band’s meteoric rise over the next two years. Although Abasi earned acclaim as the lead guitarist in the Washington, D.C.-based metalcore act Reflux, it was still a long-shot that an instrumental album of progressive metal with jazz, electronic and ambient flourishes would develop anything more than a cult following. Whereas the group’s self-titled debut was a collaboration between Abasi and Periphery’s Misha Mansoor, 2011 sophomore effort, Weightless features the recording debut of Animals as Leaders, the true band: Abasi (guitars), Javier Reyes (guitars) and Navene Koperweis (drums).

Eleventh Dream Day – Since Grazed LP (Comedy Minus One)
Since Grazed is either the 14th or 16th record depending on how you count them (but who’s counting?) by Eleventh Dream Day, a Chicago band with Kentucky roots. After 2015’s blistering guitar blast Works For Tomorrow, Janet Beveridge Bean, Rick Rizzo, and Douglas McCombs return alongside James Elkington and Mark Greenberg. The hour of music on this 2xLP takes the long road home, spacing out at the wheel and reveling in the journey – celebrating those along for the ride. This is not a record about what is lost, but what is still there, however nicked up and grazed it may be. Built from the bottom up, the 12 songs here start simply with acoustic guitar and a voice and layer a lush symphony of sound over the band’s most melodic tunes to-date.

Foxing – Draw Down The Moon LP (Hopeless)
Hot pink color vinyl. An album about cosmic insignificance that was inspired by games such as Dungeons And Dragons and Zork, Draw Down The Moon was produced by Andy Hull of Manchester Orchestra [CD edition due August 13.]

Alan Vega – After Dark CD/LP (In The Red)
2021 is shaping up to be the year of Alan Vega. Every year should be but, this year is definitely it. The announcement of the opening of the Alan Vega archives which will be unleashing an untold amount of unreleased material dating back to 1971 via Sacred Bones, the release of Mutator (a lost album from the mid ’90s), which has gained rave reviews, a massive feature in the NY Times…Vega has been celebrated everywhere of late. In The Red is over the moon to participate in this celebration with the release of After Dark—an album that captures a late night rock ’n’ roll session with Vega backed by Ben Vaughn, Palmyra Delran and Barb Dwyer (all members of the incredible Pink Slip Daddy as well as countless other cool projects). This album serves as a reminder that Alan Vega was an incredible rock ’n’ roll / blue / rockabilly vocalist. He was one of the best.

Ian William Craig and Kago – Split Series 24 12” (FatCat)
The 24th – and last ever – issue in FatCat’s long-running and much-loved Split Series arrives on the 25th anniversary of the Brighton-based label. It features acclaimed Canadian singer/composer Ian William Craig alongside the brilliant but little-known Estonian poet/singer Kago. Whilst markedly different, these two fine artists each use their voice as a central element of their craft, mediating it through technology and analog tape to conjure startlingly singular sound-worlds.

Sean McConnell – A Horrible Beautiful Dream CD (Sean McConnell)
Singer, songwriter and producer Sean McConnell’s latest collection of songs A Horrible Beautiful Dream approaches the difficult task of asking questions of what one really thinks they know, in the simultaneous struggle of not being afraid of the answers that emerge. Musically, the project wraps McConnell’s rich voice in moments of dark intimacy as well as vivid brightness, and guests such as The Wood Brothers, Natalie Hemby, Fancy Hagood, Audra Mae and Dan Tyminski underscore McConnell’s versatility as creative partner and commentator. McConnell’s goal in the creation of A Horrible Beautiful Dream was an album reflecting the chaotic time in which it was made, but still striving for timelessness. “You can look at the suffering of the world and you can look at the beauty of the world and you can hold them in your hands and just be present with that and not have to even understand it,” he says.