This Saturday (May 28th), Stinkweeds is hosting the 6th Annual Short Shorts with Short Leash Local Film Festival, held in the parking lot of Medlock Plaza. Every year, we work with Chris Heck of Theater 13 to feature some of the very talented local filmmakers working around the valley. Every year, this event brings out more and more people, mostly from the local film industry, leaving those of us in the music world wondering “where did all these people come from?!” The local film industry seems to be this sleeping giant that most people might not be aware of. To get an idea of just how strong this community is, we had a chat with Chris Heck about all the amazing talent and work coming out of the Phoenix area.

Stinkweeds: Let’s start with a brief description of Short Shorts with Short Leash.

Chris Heck: Short Shorts started 6 years ago as a sort of summer kick-off block party for the local film community. Over the years we’ve grown to include far more than the local film scene, which we’re very excited about because we see the community at large as a part of our community and vice versa. But in short, it’s short films, music, hot dogs, and short shorts.

SW: It seems that a community of filmmakers would be a bit different than a music community, in that there aren’t as many venues to showcase their work. Are most local filmmakers looking for these kinds of events to get their work out to a bigger audience? Can you give us an idea of how large that community is and what they are doing to share their work?

CH: I’ve been working here in the industry for six years now and I still meet at least one new person on every set. It’s kind of shocking how many people are working in our industry here, and there are new ones joining all the time. But honestly, I feel that there is a bit of a victim mentality with a lot of our film community, largely due to a lack of tax incentives. We’re all so spread out in the valley that it becomes easy to not see all of the amazing work everyone is doing. I see Short Shorts as a way to bring everyone together, creators and audience, and just say “See, here we are. We’re creating amazing work without tax incentives, without Hollywood backing. Now shake the hand of the person next to you and lets go continue to elevate the quality of work coming out of Phoenix”.

SW: I’ve learned that a lot of the technicians and creators in the local film industry work together on each others projects. Do you find that this creates a sort of “Phoenix” style? Are there any defining qualities to the films made here?

CH: Obviously our landscape sets us apart, and it’s nice to see a lot of filmmakers take advantage of that. I’d say also our scrappy-ness. We’ve really figured out how to make something out of nothing and I think you’ll absolutely see that creativity with the films this year.

SW: Over the past 6 years, Short Shorts has had bands, photo booths, a string quartet playing a live soundtrack, squirt guns and more. This year, I hear you’re adding outdoor games as a way to ramp up the party vibe. Looking ahead 5 years into the future, what would you like to see added to the Short Shorts event?

CH: And this year we’re adding tattoos from Golden Rule! Really though, we just try to follow the pace of the industry. As the filmmakers here continue to grow and expand in new and exciting directions we hope Short Shorts will be right there with them.

SW: Tell me more about these tattoos! 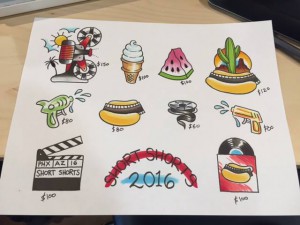 CH: With Golden Rule Tattoo now residing in Medlock Plaza, Jason Anthony approached us with the idea of doing a Short Shorts themed tattoo sheet. Golden Rule is easily one of the best shops in Arizona, so we’re hoping the line starts early for these one-of-a-kind Short Shorts souvenirs.

SW: Any final thoughts for anyone who has yet to experience Short Shorts?

Check out the Facebook event page for more details!