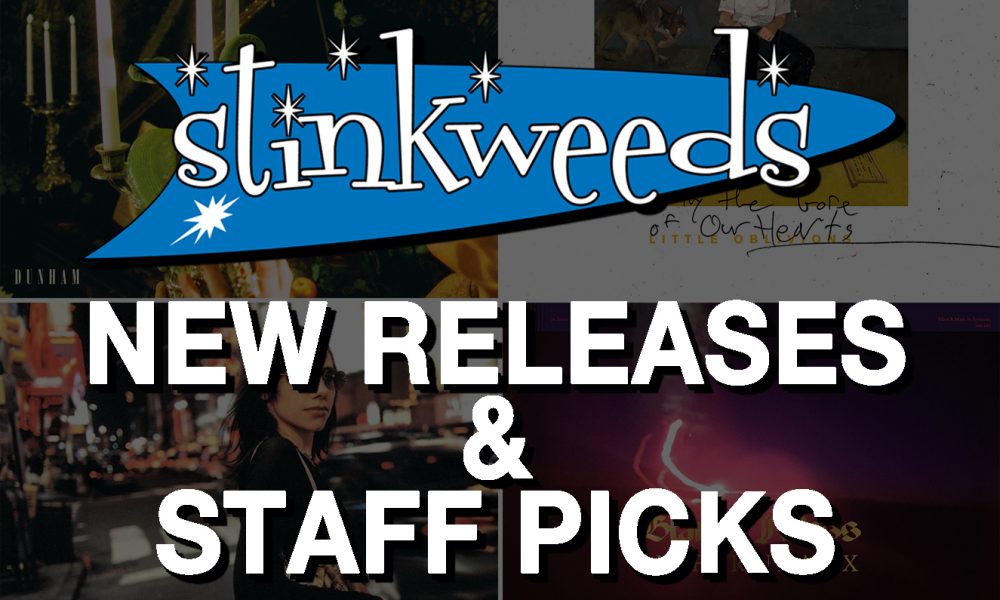 Menahan Street Band – The Exciting Sounds Of Menahan Street Band CD/LP (Daptone/Dunham)
Menahan Street Band, a veritable supergroup of some of today’s most prolific songwriters, arrangers, and producers return with this beat-forward, cinematic masterpiece. If you have spent any time hanging out in bars, cafes, or casually tuning into NPR in the last 10 years you should be well versed in MSB’s catalog. Their unique brand of instrumental soul has not only been the foundation for some of modern hip-hop’s most successful beats, it has also become the perennial soundtrack and veritable vibe-generator for countless parties, art shows, and restaurants throughout NYC and abroad. While this album carries the aesthetic torch that MSB has skillfully woven into the tapestry of their DNA, it also delves deeper into the experimental, exotic sounds that fill many of the coveted Sound Library and Soundtrack LPs of the late sixties and early seventies – an amalgamation of Moog synths, electric pianos, drum machines, and a bevy of analog instrumentation, that ebb and flow in lush swells of Morriconian grandeur.

Blanck Mass – In Ferneaux CD/LP (Sacred Bones)
What is the utility of pain? Can it do anything but fester? In Ferneaux explores pain in motion, building audio-spatial chambers of experience and memory. Using an archive of field recordings from a decade of global travels, isolation gave Blanck Mass an opportunity to make connections in a moment when being together is impossible. The record is divided into two long-form journeys that gather the memories of being with now-distant others through the composition of a nostalgic travelogue. The journeys are haunted with the vestiges of voices, places, and sensations. These scenes alternate with the building up and releasing of great aural tension, intensities that emerge from the trauma of a personal grieving process which has perhaps embraced its rage moment.

Brijean – Feelings CD/LP+MP3 (Ghostly International)
Growing up in a family immersed in jazz, Latin and soul music, Murphy would become an accomplished DJ, session and live player in Oakland’s diverse music scene and one of indie’s most in-demand percussionists (Poolside, Toro y Moi, U.S. Girls). In 2018, she began recording songs with multi-instrumentalist and producer Doug Stuart, who shares a background in jazz and pop in bands such as Bells Atlas, Meernaa, and Luke Temple. Following their first sessions, which resulted in the mini-album Walkie Talkie (released in 2019 on Native Cat Recordings), the duo continued freeform hangs in Oakland, inviting friends Chaz Bear, Tony Peppers, and Hamir Atwal.

Melvins – Working With God CD/LP (Ipecac)
Working With God is the new studio album from the legendary Melvins featuring their 1983 line-up of Buzz Osborne, Dale Crover and original drummer Mike Dillard. Released along with new reissues of 2002’s Hostile Ambient Takeover and 1987’s Gluey Porch Treatments, Working With God follows this incarnation of Melvins’ 2013 album Tres Cabrones. One of the band’s most playful and melodic efforts, the 13-track collection is introduced by “I F**k Around”, a juvenile re-imagining of The Beach Boys’ classic “I Get Around” and “Bouncing Rick”, about Osborne and Dillard’s junior-high biology teacher. “It’s reflective of our 8th grade sense of humor, which we’ve never grown out of,” Osborne said of “I Fuck Around.” “We hope Brian Wilson doesn’t get mad.” [A limited indie store exclusive silver color vinyl pressing is available. Vinyl reissues of Gluey Porch Treatments and Hostile Ambient Takeover are also available.]

Atlin Gün – Yol CD/LP (ATO)
Altin Gün deliver their third album Yol, the full-length follow-up to the band’s 2019 LP Gece, which earned a Grammy nomination for Best World Music Album. Fronted by vocalists Merve Dasdemir and Erdinç Ecevit, Altin Gün has won worldwide acclaim for their re-imaginings of traditional Turkish folk songs through the lens of pop and psych-rock. 2020’s Coronavirus quarantine forced the band to write music in a completely new way, trading demos and ideas over email, and the resulting songs mark a new direction for the band as well, with a shift to a sleeker, synth driven Europop sound. Yol displays a noticeable dreaminess, maybe born from this enforced time to reflect. And select elements of late 1970s or early 1980s “Euro” synth pop also shine through. This new musical landscape was nurtured by certain instrument choices; namely the Omnichord, heard on “Arda Boylari”, “Kara Toprak”, and “Sevda Olmasaydi”, and the drum-machine, an instrument that is key to the gorgeous closing number, “Esmerim Güzelim”. [A limited indie store exclusive vinyl pressing is available.]

Neil Young with Crazy Horse – Way Down In The Rust Bucket (Live At The Catalyst, 1990) 2xCD/4xLP (WB)
Recorded on November 13, 1990 in Santa Cruz, Way Down In The Rust Bucket represents one of the most significant and storied shows of Neil Young’s fabled career. Staged just after the release of Ragged Glory – the striking album that preceded and influenced the impending explosion of similarly energetic, distortion-addled rock that became known as grunge and changed the face of popular music – the set finds Young pairing with his longtime cohorts in Crazy Horse and turning in a marathon performance for the ages. Intended as a loose rehearsal for an arena tour at the Catalyst Club, a venue whose intimate confines only seems to stoke the band’s energy, passion, and enthusiasm (not to mention its connection with the audience), it is the stuff of legend.

Julien Baker – Little Oblivions CD/LP+MP3 (Matador)
Little Oblivions is the third studio album by Julien Baker. Recorded in Memphis, TN, the record weaves together an unflinching autobiography with assimilated experience and hard-won observations from the past few years, taking Baker’s capacity for storytelling to new heights. It also marks a sonic shift, with the songwriter’s intimate piano and guitar arrangements newly enriched by bass, drums, keyboards, banjo, and mandolin with nearly all of the instruments performed by Baker.

The Black Crowes – Shake Your Money Maker: 2020 Remaster 2xCD/LP (American)
Digitally remastered edition of the debut studio album by rock band The Black Crowes, which was originally released on February 13, 1990 on Def American Recordings. It is the only album by the band to feature guitarist Jeff Cease. [The expanded double-CD edition includes the original album, remastered; three never-before-heard studio recordings; and two unreleased demos from the band’s early incarnation as Mr. Crowe’s Garden; and B-sides. The Super deluxe three-CD and four-vinyl LP editions are due March 19.]

Pinegrove – Amerpland, NY CD/2xLP (Rough Trade)
Founded by childhood friends Evan Stephens Hall and Zack Levine, Pinegrove have already crafted three fantastic albums – Everything So Far (2015), Cardinal (2016), and Skylight (2018) – and achieved massive critical acclaim and a widespread and devoted listenership. The band’s latest album (and first for Rough Trade) Marigold, arrived in January of 2020, and its themes of reflection and resilience have resonated through an especially tumultuous year. Now with tours cancelled and time on their hands, the band have decided to put together something special for their fans.

Smerz – Believer CD/LP+MP3 (XL)
Smerz is the Nowegian duo of Henriette Motzfeldt and Catharina Stoltenberg. Known for the “carefully shaped, deconstructed pop” (Boomkat) of their debut EPs Okey (2017) and Have Fun (2018), Smerz seamlessly weave together techniques and sounds pulled from chamber and classical music, hip-hop, R&B, and hard electronics, with the end product always resulting in something altogether uncanny.

Stereolab – Electrically Possessed (Switched On Volume 4) 2xCD/3xLP (Warp)
The fourth in the Switched On series that compiles Stereolab’s non-album tracks and sought after deep cuts. Following on from the first volume released in 1992, 1995’s Refried Ectoplasm, and 1998’s Aluminum Tunes, the long-awaited fourth installment spans 1999-2008 in the Stereolab story and collates three LPs worth of material, all remastered from the original tapes and overseen by the band. It features all the tracks from out-of-print and sought after mini-album The First Of The Microbe Hunters, one-off and impossible to find tour 7″s, compilation tracks, art installation work and a couple of unreleased outtakes from the Mars Audiac Quintet and Dots And Loops recording sessions.

Cloud Nothings – The Shadow I Remember CD/LP+MP3/Cassette (Carpark)
For a band that resists repeating itself, picking up lessons from a decade prior is the strange route Cloud Nothings took to create their most fully realized album. Their new record, The Shadow I Remember, marks eleven years of touring, a return to early songwriting practices, and revisiting the studio where they first recorded together. In a way not previously captured, this album expertly combines the group’s pummeling, aggressive approach with singer-songwriter Dylan Baldi’s extraordinary talent for perfect pop. To document this newly realized maturity, the group returned to producer Steve Albini and his Electrical Audio studios in Chicago, where the band famously destroyed its initial reputation as a bedroom solo project with the release of 2012 album Attack On Memory. The Shadow I Remember announces Cloud Nothings’ second decade and it sounds like a new beginning.

Mouse On Mars – AAI CD/2xLP+MP3 (Thrill Jockey)
Mouse on Mars, the Berlin-based duo of Jan St. Werner and Andi Toma, approach electronic music with an inexhaustible curiosity and unparalleled ingenuity. Operating in their unique orbit within dance music’s nebulous ecosystem, the duo’s hyper-detailed productions are inventive, groundbreaking but always possessing a signature joyful experimentation. A genre-less embrace of cutting-edge technologies have ensured that each Mouse on Mars release sounds strikingly modern, a fact made more remarkable when one reflects on the duo’s 25 years of making music. New album AAI (Anarchic Artificial Intelligence) takes Toma and Werner’s fascination with technology and undogmatic exploration a quantum leap further. Collaborating with writer/scholar Louis Chude-Sokei, a collective of computer programmers and longtime Mouse On Mars collaborator/percussionist Dodo NKishi, the duo explores artificial intelligence as both a narrative framework and compositional tool, summoning their most explicitly science-fiction work to date.